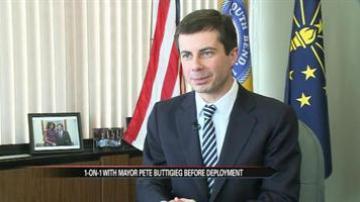 SOUTH BEND, Ind. -- South Bend Mayor Pete Buttigieg is just days away from leaving Michiana to be deployed to Afghanistan. Buttigieg is an officer in the US Navy Reserve. He begins active duty on February 28th.

"I'm feeling more and more prepared. Obliviously there is a mix of emotions that goes into getting ready for something like this. But the most important thing has been making sure the administration is in good shape and the city is in good hands and I feel really good about that," said Buttigieg.

City Controller Mark Neal will serve as deputy mayor while the mayor is overseas.

Buttigieg expects Neal to move the city forward in his absence.

"I've made sure the team knows what's expected while I'm away. Just because I'm away doesn't mean anything in the city has to go on pause. We got so much important work on everything from the situation in neighborhoods or vacant and abandoned houses, getting that downtown conversion right and driving economic development. All of those things need to continue while I'm away," said Buttigieg.

The mayor says he expects to be able to return home in October.

When he returns he will start on his re-election campaign.

Until then, his main focus is getting ready to head out and serve our country.

"On the personal side, just a lot of things to take care of, getting the home squared away, moving some of my preliminaries and paper work on the Navy side," said Buttigieg. "I'm sure it will be all right and I'm already looking forward to being home in October."

The mayor said he will be in constant contact with Neal and his administration while in Afghanistan.