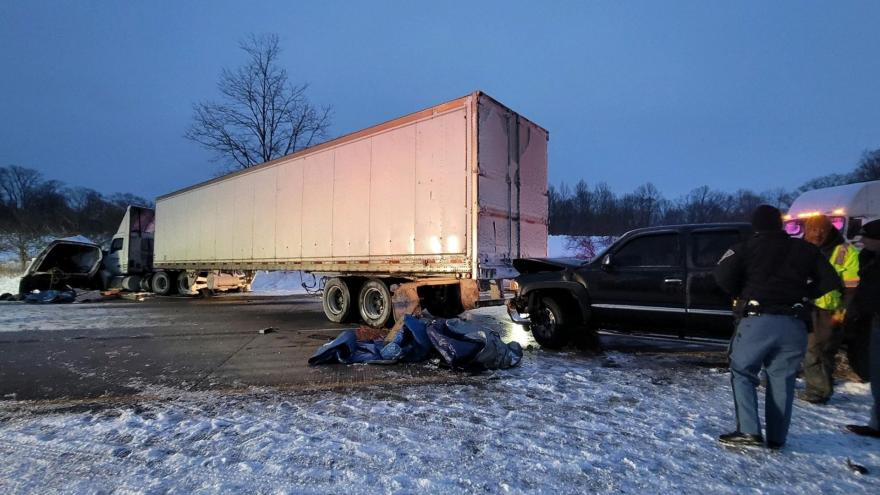 LA PORTE COUNTY, Ind. – One person has died and two others were injured in a four-vehicle crash along I-94 Thursday morning, Indiana State Police reported.

At 5:30 a.m., troopers were called to the eastbound lanes on I-94 near the 36.8 mile-marker for a one-vehicle rollover crash.

According to the investigation, a red 2005 Dodge Ram had rolled to a stop in the far-right lane. The driver got out of the vehicle and was standing away from it when it was struck by a white 2005 Chevrolet cargo van, reports said.

After striking the truck, the van spun into the path of a semi tractor-trailer.

The semi then struck the passenger side of the van, troopers said.

The driver of a black 2007 GMC truck saw the crash happen and spun out trying to avoid it. The driver of the GMC lost control, struck the center median wall, and then hit the semi’s trailer.

A passenger in the Chevrolet cargo van was pronounced dead at the scene.

A second passenger in the van was critically injured and flown to Chicago for treatment.

A third passenger was initially pinned in the van but was later taken to the hospital for treatment.

The drivers of the Dodge Ram, semi, and GMC truck were not injured in the crash.

The road was closed for four and a half hours for the investigation and cleanup.