One year after he was shot, Steve Scalise takes the field 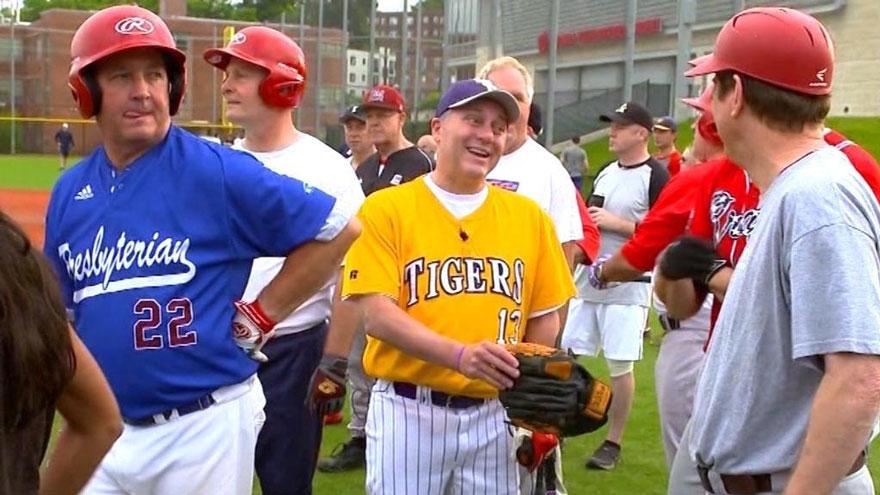 (CNN) -- As House Majority Whip Steve Scalise bends down to field a ground ball rolling his way, it's clear the movement is neither easy nor natural any more.

It's more labored, more mechanical -- a bend at the waist, more ginger bend at the knees, with a clear search for natural balance -- the kind that at one point left him completely and to this day can still be fleeting. Lateral movement is out of the question, leaving any ball more than a foot or two to his right or left best left for a teammate.

Yet there he is, bent over anyway, explaining how he got to this point as the ball rolls into his beloved old mitt.

In short, it's a process, one that in a way is emblematic of what the third-ranked Republican in House has gone through -- put himself through -- in the last year. Scalise is still in the midst of intensive rehab and therapy. He's had nine different surgeries. At one point he'd lost more than 50 pounds. He went from a hospital bed to a scooter (or Geaux Cart as the New Orleans native called his motorized vehicle decked out in Louisiana State Tiger purple and gold) to two crutches to now, one.

See, even a few months ago, Scalise bending over to field a ground ball, however mechanical, wasn't an option. The recovery from a grievous gunshot wound that shattered his pelvis, hip and left femur isn't fast, and the reality behind that recovery -- mental and physical scars alike -- isn't necessarily packed with the relentless optimism Scalise is known for bringing to the table. The rehab is long, arduous and painful. Coming to terms -- and in some cases for Scalise that was by reliving the shooting through the eyes of others who were there -- is an emotionally taxing and incomplete process.

Scalise knows he's not going to be the star of the game itself -- he jokes if the Republicans are relying on him for victory, they're not in great shape to begin with. But he told his therapist a few months ago he wanted elements of his rehab dedicated to getting back to playing baseball, so there he is, taking batting practice and fielding ground balls, a gold LSU jersey on his back.

At a time of intractable political differences and extreme partisan divides, the annual Republican vs. Democrat game is more three hours of levity and gamesmanship than solution to any grand problems. The ideological and political battles run up to the first pitch and restart as soon as the last out is recorded. Even in the heady moments and bold proclamations of reconciliation, pragmatism and better angels that came with Scalise's return to the Capitol three months after he nearly died have long since left the building -- or at least been relegated to some corner basement office space. Midterm election season is in full gear, of course.

Yet for Scalise, the game became equal parts goal and marker in the months following the shooting.

To hear his colleagues on the field June 14, 2017, it almost defies belief that he's reached this point.

Those there on that morning describe it in the most visceral of ways -- the initial confusion that turned into shattering fear, moments of hopelessness during the seemingly endless seven minutes between the first shot and the shooter going down, the selfless effort by two men to lay atop of the 10-year-old son of Rep. Joe Barton to protect him.

In all, five people were wounded. Zack Barth, a congressional staffer helping the team out, was shot in the leg. Matt Mika, a lobbyist who volunteered to help the team, was shot twice, one of the wounds so bad that several members who saw him at the scene said they didn't think he would survive. Then there was Special Agents Crystal Griner and David Bailey -- the members of Scalise's protective detail the congressman credits with saving his life.

Rep. Brad Wenstrup, an Ohio Republican who served as a combat surgeon in Iraq, was one of the first members to reach Scalise.

"When I saw his wound, I pulled down the pantleg to see the wound, I did not find an exit wound I knew he was in big trouble, because that meant it went up and I'd seen things like this in Iraq," Wenstrup told CNN. "We were able to use a belt at first, until a tourniquet came, and then I found a clotting bandage and got that on and was able to do what we do in theater, and he literally left in a helicopter just like in theater."

What actually happened that day -- beyond what specifically happened to him -- was something Scalise couldn't grasp for months. The scope and scale of the shooting, the heroic efforts of Bailey and Griner -- all of that was lost on him as he lay wounded in the outfield.

A few months ago, that changed. Scalise went back to the Alexandria, Virginia, practice field with Bailey.

"I never saw the shooter, never really saw where he was and then, it just hurt a lot," Scalise said. "But (I) wanted to have him walk me through what he saw and did."

This is how Scalise described what Bailey told him:

"The shooter is just firing away at us, unobstructed right at the third base dugout. He runs out to first base, I'm laying on the ground over there. He runs out to first base, starts shooting at the guy. And I mean, he's totally exposed. Guy starts shooting at him. I mean, it's just a wild west shootout. And once that started, the shooter's not shooting at us anymore, we were sitting ducks, he's shooting at (Bailey). And (Bailey) moves over, behind first base by the Suburban. And if you look at the Suburban, the Suburban is just riddled with bullets. It was an intense shootout and he was heavily outgunned. ... (Griner) got hit, and both of them kept going at it. Just to see that bravery, and have him explain how it all went down, it was emotional but it was important to kind of close that circle."

Long road back to the field

Reliving the shooting through Bailey's eyes painted a gripping yet terrifying story that explained the daunting medical issues Scalise faced in the early days and weeks following the shooting. He was unconscious in the days immediately following the shooting, and it wasn't until he moved to the rehabilitation center that his trauma surgeon walked him through what had occurred in the immediate aftermath.

"He said 'look the first few hours there were at least two times where we weren't sure you were going to make it,'" Scalise recalled. "I show up with almost no blood left in my body and then they had to put more than two times the amount that a human body holds in, just to kind of find all the bleeding, stop all the bleeding, and then figure out how to undo the damage that the bullet did. It was an intense first two days. He walked me through that. It was real emotional and helped me understand just how serious everything was."

His colleagues faced their own battles. The first practices for this year's game were held at the same field as the shooting. That was soon changed, to the relief of many.

"I think everyone looks over their shoulder a little bit more," Wenstrup says. "Certainly the concerns were there, it's part of the reason why we wanted to change fields, just for different atmosphere."

Scalise gathered the team in his office shortly after he returned to Congress last September. They shared stories, told of fears and concerns, recounted the day itself.

"It really helped put all the pieces together to see a full encapsulation of what went down that morning and how everyone was touched in a different way by those events," Scalise recalled.

As metal bats pinged in batting practice behind him, Scalise demonstrated how his rehab efforts had gotten him to the point where he could field a ground ball, it was clear, physically at least, the road back to normal is still long. And yet to look around the practice underscored the game of baseball -- the congressional baseball game specifically -- brought into focus all he that had been done last 12 months.

But standing a couple dozen feet away from Scalise was Bailey, still on his protective detail, and healthy. On the mound was Mika, throwing batting practice in his hometown Detroit Tigers jersey, healthy. Barth was nearby as well. And Scalise?

As to whether he's got closure emotionally, he's almost there, Scalise told CNN the night before the big game.

"I think after tomorrow night, it will be."