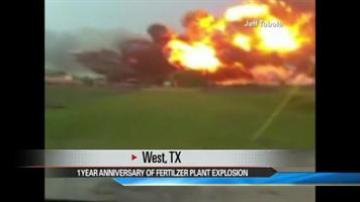 WEST, Texas -- Thursday marks the one year anniversary of a devastating fertilizer plant explosion in the small town of West, Texas.

Fifteen people were killed and nearly 200 were injured.

The city's mayor says he is looking toward the future but will never forget those who lost their lives that day.

"You don't ever get over it. I still, I still right now, you say that, I see Cody Dragoo and his little smile, and I see Joey Pustejovsky with his dimple," said Mayor Tommy Muska.

The town recently hired the same economic development consultants who helped New Orleans and Galveston start over after hurricanes Katrina and Ike.