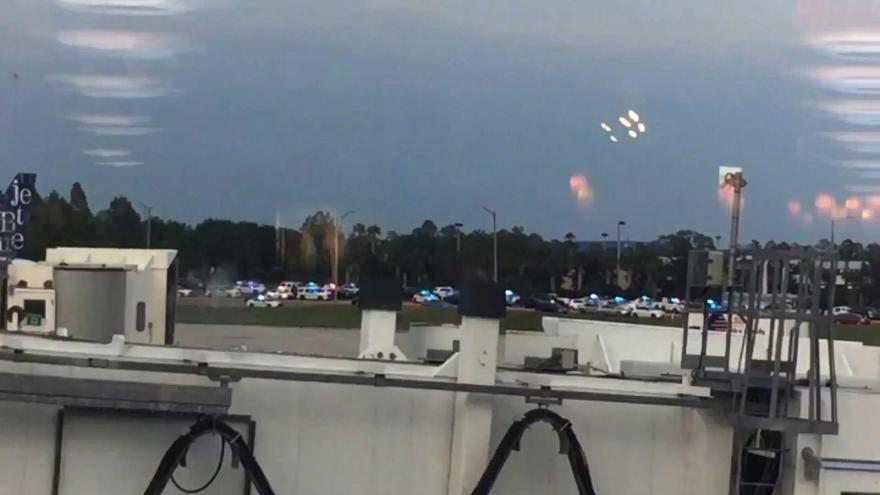 By Steve Almasy and Faith Karimi

(CNN) -- Hundreds of officers descended on Orlando International Airport on Tuesday night after reports of a man with a gun near the rental car area. But the weapon turned out to be fake, authorities said.

A two-hour standoff that followed sent panicked travelers fleeing, with some hiding behind concrete barriers in the parking lot.

Police later confronted the man and ended the standoff after nearly two hours. No shots were fired and no one was injured during the incident contained to a rental car area, the Orlando Police Department said.

"When the officers got there, they realized this was a person in mental distress and basically wanted to do the whole suicide by cop thing," Orlando Police Chief John Mina said.

During the incident, a crisis negotiator talked to the man, who was pointing a gun at officers and asking them to shoot him, Mina said.

The man identified as Michael Wayne Pettigrew, 26, later surrendered and dropped his weapon. Officers then determined it was fake, the police chief said.

"He laid down on the ground with the gun very close by to him. Our negotiators did a phenomenal job of talking with the subject for about two hours and finally got him to peacefully surrender," Mina said. "We did recover a weapon, it was a simulated firearm. The gun was not real."

The former Marine faces one count of aggravated assault with a firearm and is being held for mental health evaluation, Mina said.

"Our main objective was getting him contained and that happened very quickly. Contain situation and bring to a peaceful resolution, which we did," the police department tweeted.

David Hess had traveled to Orlando on business and was standing at the Dollar/Thrifty rental car counter.

A Thrifty employee ran in from a garage area and told them, "There is a guy out there with a gun, Take cover. He has a huge gun," Hess said.

Other employees seemed unsure of what was going on, according to Hess.

He said he called 911 and an operator told him there were reports of a man with a gun in one of the rental car parking lots.

Hess and other customers rushed to another garage and hid behind concrete beams. They remained there for several minutes before employees told them the suspect was surrounded.

Hess got a car and left the airport, but said there were no warnings over the intercom about the man with the gun and he didn't see security guards near the rental counters.

There was minimal impact to airport operations, the airport tweeted. It said planes due to arrive there were affected but flight tracking websites indicated some flights were still departing.

Aerial footage from CNN affiliate WESH's helicopter showed a long line of police cars with their emergency lights flashing outside and reporters tweeted photos of massive traffic backups on the airport roads.

"I want to thank law enforcement for their quick response and efforts to put the suspect in custody and keep families safe," Gov. Rick Scott tweeted.

CNN's John Couwels and Jamiel Lynch contributed to this report.