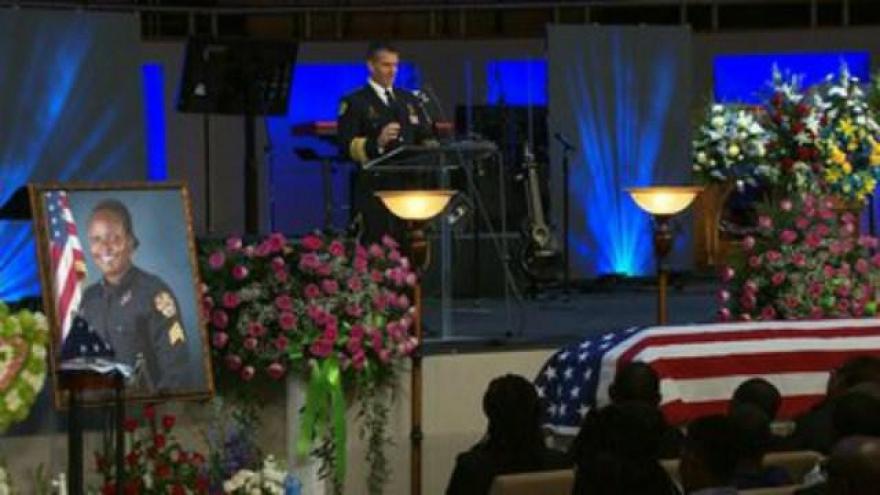 (CNN) -- On the day she was laid to rest, Orlando police officer Debra Clayton received one final honor from her department. She was promoted to lieutenant.

Clayton, 42, was killed Monday as she tried to confront a murder suspect at a Walmart. The suspect is still at large.

Her chief, John Mina, told thousands of people gathered Saturday for a memorial service that Clayton did not die alone.

"She was surrounded by blue," he said.

With fellow officers, family and friends in attendance, she was remembered at a touching ceremony at First Baptist Church of Orlando.

Clayton was well-liked by her coworkers. "She's going to be missed but never forgotten," an Orlando officer told CNN affiliate WKMG. "She loved helping people. ... We know she made a difference, and the rest of us will continue to try to live in her legacy."

Clayton's flag-draped casket was brought into the church and a long line of people, many of them crying, came by to pay respects before the service. As it was carried from the hearse one boy saluted the fallen officer.

Dozens of family members came for the service. Her brother, Rudy Thomas (not pictured), told the audience she loved deeply and wouldn't sugarcoat her advice.

"There wasn't no fake-fake about it," he said. "If she had anything to say that was on her mind, she would tell you and let you know."

Clayton's body was taken to Woodlawn Memorial Park & Funeral Home. On the route, police officers from around the country lined the road. Many will attend another funeral Sunday for an Orange County Sheriff's deputy, Norman Lewis, who was killed in a traffic accident while searching for Clayton's killer.

Debra Clayton was recently married and was a member of the Orlando Police Department for 17 years. Clayton devoted herself to helping young members of the community, Mina said earlier this week.