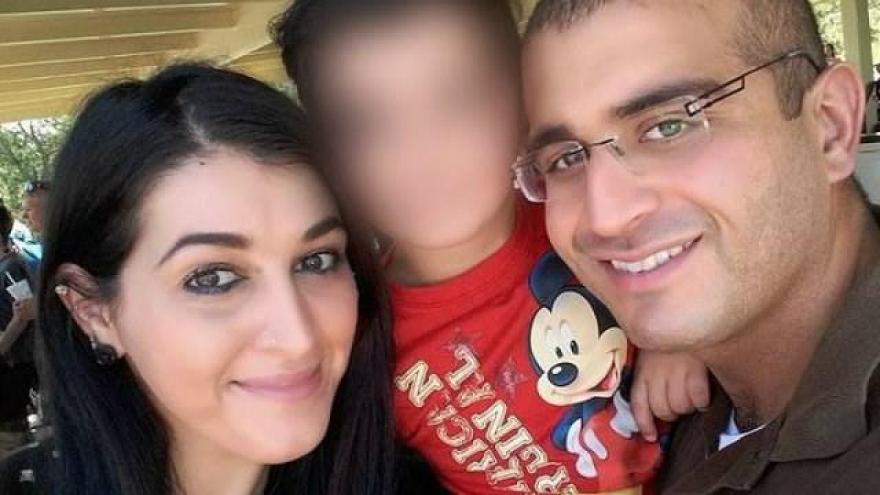 OAKLAND, California (CNN) -- The widow of the man who killed 49 people at an Orlando gay nightclub knew he was going to attack, a federal prosecutor said Tuesday at her initial court appearance on charges that she aided and abetted the gunman in the deadliest mass shooting in US history.

Her family, meanwhile, maintains Noor Salman had no idea that her husband, Omar Mateen, was going to commit the June 12 massacre at the Pulse nightclub.

Salman, wearing a yellow T-shirt and gray cloth pants, responded to a judge's questions quietly in a brief appearance in federal court in Oakland on Tuesday, a day after her arrest at her parents' home in the San Francisco suburb of Rodeo.

A grand jury this month charged Salman with obstruction of justice and aiding and abetting her husband's material support to ISIS, the Islamist terror group to which Mateen pledged allegiance in phone calls with 911 and the media before dying in a shootout with police.

"She knew he was going to conduct the attack," Assistant US Attorney Roger Handberg told the judge Tuesday.

The government will want the case heard in Florida, where the killings happened and where Salman and Mateen lived with their young son at the time, Handberg said.

The judge read the charges and asked Salman if she understood her rights.

"Yes, your honor," she said softly, her head bowed.

Salman's formal arraignment was delayed until Wednesday morning. A public defender asked for the delay so that a decision can be made about who will be her lead attorney.

Salman, who married Mateen in 2011 and lived with him and their son in Fort Pierce, Florida, came under scrutiny as authorities investigated the gunman, who killed 49 people and injured more than 50 others when he opened fire at Pulse.

Authorities interviewed Salman after the shooting, but she remained free until Monday.

At issue was how much of Mateen's intentions she knew ahead of time.

Outside the courtroom Tuesday, Al Salman described his niece as a sweet woman who knew nothing of the attack ahead of time.

"She is a very simple person. She didn't know what's going on," he told a throng of reporters.

She swore to him that she had "no idea what that crazy guy is doing," the uncle said.

Court documents spelling out the indictment allege, without elaborating, that Noor aided and abetted her husband from at least April onward. An official told CNN on condition of anonymity that evidence will show she was complicit and had to know her husband was going to do something bad.

Her Florida-based attorney said Salman had no prior knowledge that her husband would kill anyone at Pulse.

"Noor Salman had no foreknowledge nor could she predict what Omar Mateen intended to do that tragic night," family attorney Linda Moreno of Tampa, Florida, said Monday.

"Noor has told her story of abuse at his hands. We believe it is misguided and wrong to prosecute her and that it dishonors the memories of the victims to punish an innocent person."

Investigators believe Salman acted of her own free will and knowingly took steps to obstruct the probe into the massacre, according to a law enforcement official. The official said Salman's assertions she was coerced through her husband's abusive behavior did not stand up.

What she said, according to investigators

Salman grew up in Rodeo after her parents had emigrated from the West Bank in 1985, according to The New York Times. She told the Times that she met Mateen on a dating site in 2011 and the couple married later that year.

They settled in Fort Pierce, about a two-hour drive from Orlando. They have a son, who was 3 at the time of the Pulse shooting.

Salman gave conflicting accounts about what she knew of Mateen's intentions in the hours before the attack, authorities said. Salman told the FBI her husband said he wanted to carry out a jihadist attack. But she denied knowledge of his plans, a law enforcement official told CNN last year.

Two law enforcement officials previously told CNN that months before the attack, Mateen added the name of his wife to his life insurance policy and made sure she had access to his bank accounts. In May, the gunman transferred his share of a home to his sister and brother-in-law for $10.

Mateen also bought his wife an expensive piece of jewelry, the sources said.

Salman told investigators that in the weeks leading up to the attack, Mateen spent thousands of dollars, buying among other things the guns used in the massacre. In April, he visited Disney World with his wife, and Disney security officials believe he was conducting surveillance, a law enforcement official told CNN.

Two days before the attack, he left his house angry and was carrying a bag of guns, law enforcement officials said, citing Salman's account to investigators. Salman said she begged her husband not to leave and grabbed him by the arm, the officials said.

Two hours after the attack started, Mateen texted his wife at 4 a.m. and asked her whether she had heard any news about the shooting. At one point, Salman sent a text to Mateen saying that she loved him, a law enforcement official said.

Last year Mateen's ex-wife, Sitora Yusufiy, described a brief but violent relationship to a man whom she was only able to escape through her family's help. She said he was physically abusive and a steroid abuser.

The complexities of gathering evidence to allege that someone helped Mateen may help explain the seven-month gap between the shooting and arrest, CNN terrorist analyst Phil Mudd said.

"Building a case that says not only was she aware that he bought a weapon and that he traveled to Pulse, but that she was somehow cognizant that he was going to commit an act of violence, that's pretty tough when you have only two people participating and one is dead," Mudd said.