Oscar Pistorius sentenced to 6 years in prison for girlfriend's death 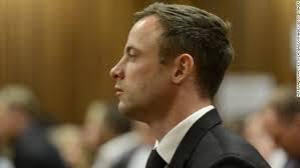 (CNN) -- A South African judge sentenced Olympic sprinter Oscar Pistorius to six years in prison for his girlfriend's murder -- the latest ruling in a drawn-out case that has transfixed the nation for years.

Pistorius killed Reeva Steenkamp at his home in an upscale Pretoria neighborhood in the early hours of Valentine's Day three years ago -- a killing he says was an accident, after he mistook her for an intruder, but one the prosecution called a deliberate act after the two had an argument.

The same judge originally convicted him of manslaughter in 2014 after months of hearings, but a higher court reversed that to murder last year, leading to Wednesday's sentencing.

Barring an appeal, it will be the final sentencing in a saga that started when Pistorius fired four bullets through his bathroom door on that fateful morning in February 2013.

From hero to killer

Despite a series of hearings, questions remain about exactly what happened at 4 a.m. that morning. Stunned fans have wondered how the celebrated former Olympian and Paralympic gold medalist turned into a killer.

The prosecution has said that Pistorius had a violent streak, and that he murdered his lover after a late-night argument. But the judge said there was no evidence supporting the accusation that the two had a fight.

The defense has always maintained that the amputee track star mistakenly believed Steenkamp was an intruder and feared for his life when he shot through the door.

While the opposing sides offer different versions of what happened, one thing is certain: Pistorius will not be a free man for a long time.

And it's not the first time he's going to prison in Steenkamp's killing.

After a nearly 50-day trial stretched over seven months, Pistorius was found guilty of culpable homicide (much like manslaughter) in September 2014.

Judge Thokozile Masipa ruled the sprinter had acted negligently when he shot Steenkamp, but that he didn't do it intentionally, and sentenced him to five years in prison.

He served a year of that sentence, and was released to house arrest in October.

But the Supreme Court of Appeals overturned the verdict last December, and found him guilty of murder. The appeals judge said Pistorius should have known that firing his gun would have killed whoever was behind the door, regardless of who he thought it was.

The minimum prison sentence for murder in South Africa is 15 years, and the prosecution had called for no less. But the defense tried to secure a shorter sentence by arguing that his disability and emotional state were mitigating factors.

In giving him six years, Masipa cited mitigating circumstances for the lesser punishment, saying Pistorius is genuinely remorseful and a good candidate for rehabilitation.

She described him as a "fallen hero" who will never be at peace.

"It must be one of the most difficult things for any accused to have to face the victims of his crime and to apologize," the judge told the court.

Pistorius' defense team will not appeal the six-year sentence, and the prosecution has not said whether it will.

Some decried the sentence, saying his celebrity status contributed to a lenient sentence.

Pistorius' brother jumped to his defense.

"The record has been set straight and justice done. The truth will always prevail," Carl Pistorius tweeted.

Defense: Pistorius feared for his life

During his sentencing hearing in June, Pistorius hobbled across the court without his prosthetic legs, weeping as defense attorney Barry Roux argued that he was a broken man who deserved leniency.

"He suffers from an anxiety disorder. We know that ... when he was on his stumps, his balance was seriously compromised, and without anything he won't be able to defend himself," Roux said.

Pistorius was not wearing his prostheses at the time of the shooting. Roux painted a picture of a fearful man on his stumps, trying to protect a loved one. He said Pistorius never intended to kill Steenkamp, and that he had tried to save her life.

"He was anxious, he was frightened. ... He was suffering from anxiety disorder, and that's not gone," Roux said. "This must all be seen in context of his disability."

The shooting has changed his life forever, the defense argued.

"The accused can never resume his career," Roux said. "The accused has punished himself and will punish himself for the rest of his life far more than any court of law can punish him."

But chief prosecutor Gerrie Nel said Pistorius could not truly be remorseful when he had failed to give a satisfactory account of why he had fired the fatal shots.

Nel said the "broken man" was the victim's father -- not Pistorius.

Earlier in the sentencing hearing, Barry Steenkamp pleaded for Pistorius to be punished for murdering his daughter.

Weeping and trembling on the stand, he told the court that he still speaks to his daughter every day and thinks of her "every morning, afternoon and night."

"I don't wish that on any human being, finding out what happened. It devastated us," Steenkamp said. "I ended up having a stroke and so many things since then have happened to me."

The father said his wife, June, had forgiven Pistorius, but he must still pay the price for his crime.

"You have to understand that forgiveness doesn't exonerate you from what you did," he said.

Shortly after the sentencing, Steenkamp's parents left the courthouse without saying a word.

Pistorius walked out of the courthouse and into a waiting police van.