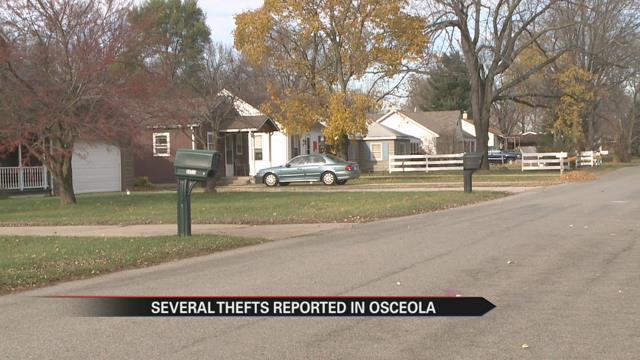 A string of thefts hit Osceola this weekend. Now, St. Joseph County Police say they might be looking for a repeat criminal.

It’s something Bud Zimmer has only seen happen one other time in his 42 years living one of the targeted Osceola neighborhoods.

That changed over the weekend.

“There were close to a half a dozen incidents over the weekend where there were thefts from vehicles,” said Assistant Chief Bill Thompson of St. Joseph County.

Thompson says it’s more thefts in one area than he usually sees.

Police are working to find that violator.

“We check with local pawn shops. Most of the pawn shops in that area are pretty good about working with us on those things,” Thompson said.

He also recommends you lock your car, and make sure anything of value is not visible.

Zimmer, who has four cars, takes it a step further with a fence and porch light.

Unlike his neighbors, he wasn’t targeted by the thieves.

“It seems to be pretty peaceful,” Zimmer said.

Only one of the targeted vehicles was locked but the thief broke through the roof.

St Joseph County Police also want to remind folks that this kind of thing can happen more and more when cars are cars unlocked to warm them as it gets colder.