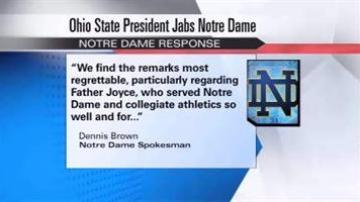 COLUMBUS, Ohio — The president of Ohio State is apologizing after for jabs aimed at Notre Dame.

ESPN reports that in a recording of a meeting last year, President Gordon Gee said Notre Dame was never invited to the join the Big Ten.

He can be heard saying the school's priests aren't good partners.

Gee even joked saying "those Catholics" can't be trusted and that "priests are only holy on Sundays."

In a written response, the University of Notre Dame said "we find the remarks most regrettable, particularly those regarding Father Joyce, who served Notre Dame and collegiate athletics so well and for so long."

President Gee has offered an apology.