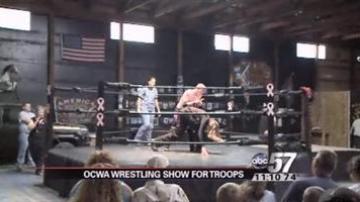 ELKHART, Ind. -- The Outlaw Championship Wrestling Association decided to pay tribute to the troops in a special way Saturday night.

Dozens of people packed the stands at the OCWA Wrestling Arena in Elkhart to watch some big name local celebrities duke it out!

Every third Saturday of the month the shows are free including the show Saturday night!
One wrestler believes it's the least he can do..
"We are one hundred percent behind them. I mean, because, what they do for us, they're fighting for us. And we aren't able to say thanks, but this is our way of saying thanks," said Ben Little, OCWA Wrestler.
The OCWA holds shows every Saturday night.
Admission only costs five dollars.
Share this article: