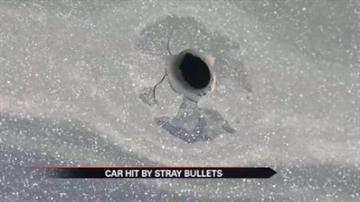 SOUTH BEND, Ind. -- During New Year’s Eve celebrations, some people in South Bend fired off guns. One resident parked his car behind his house to protect it from drunk drivers only to find it riddled with bullet holes the following day.

"It's absolutely unacceptable, this sort of behavior, for a number of reasons,” said Detective Sergeant Ian McQueen of the South Bend Police Department.

The car is riddled with bullet holes. Luckily no one was inside the car or the backyard when it happened.

"Bullets went through the fence and struck other objects. They could have struck people,” said McQueen.

Investigators searched the neighborhood and found what they were looking for just two doors down.

"We've found quite a bit of evidence, a number of spent shell casings as a matter of fact. So it's not to be confused with fireworks in this particular case, we know that bullets were fired,” said McQueen.

While shooting video, ABC57’s Jason Aubry found a slug gleaming in the snow.

"A bullet of this size certainly would kill someone,” said McQueen.

Even though it fits the holes in the fence and car perfectly, there is no guarantee that it came from the same group that was fired Monday night.

"We have a forensic team, we have a laboratory, and they'll be able to determine whether or not that's the sort of bullet that went through these objects at that property,” said McQueen.

Even though the evidence is piling up, the people living at the home where the shells were found are not on the hook for the damage that was caused.

"No they're not as a matter of fact. If we have evidence that somebody has broken one of our firearm laws in the city, certainly they would be cited for that; simply because it occurred at their house isn't quite enough, we still have to prove a case,” said McQueen.

If an eyewitness were to come forward, an arrest could be made.

This was not the only case of vandalism from Monday night. Several other people reported windows being shot out as well.

Despite the number of incidents, no one has been reported injured by a stray bullet.