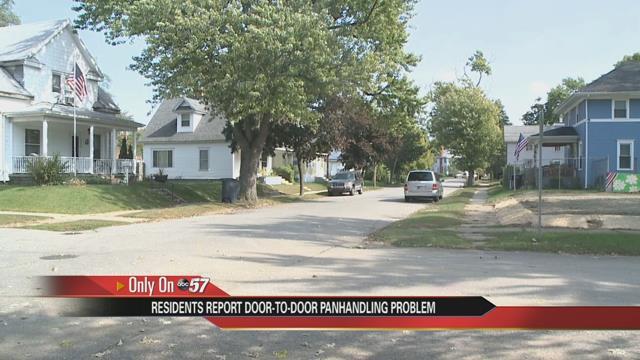 Families in South Bend’s near northwest neighborhood are used to seeing panhandlers around nearby businesses.

“They ask you for fifty cents or something like that,” said resident Larry Cole.

But now they say it has gone one step further, with people coming to their homes, and knocking on their doors to ask for money.

Bridgette Roidfeld says it’s happened to her four times in the last few months, and it’s starting to scare her.

“I have four kids, and when they come and just walk right up to my doorstep, I don’t know if they’re carrying anything, or if my kids are still going to remain safe,” Roidfeld said.

Cole can’t even sit on his front porch without being asked for donations that he says he can’t even afford to give.

“We’ve got to pay bills and all that. You can’t just be giving out that money,” Cole said.

Lt. Patrick Hechlinski of the South Bend Police has some advice.

“Tell them you don’t keep any money in your house just as a standard answer and then offer to call the police to get them some assistance,” Hechlinski said.

He says giving money to just anyone is dangerous.

Instead, Hechlinski recommends donating to a charity if you’d like to care for the homeless and needy.

Neighbors in the near northwest here say they don’t mind helping people, but they’re sick of the unwanted visits.

“It’s getting too out of hand right now,” Cole said.