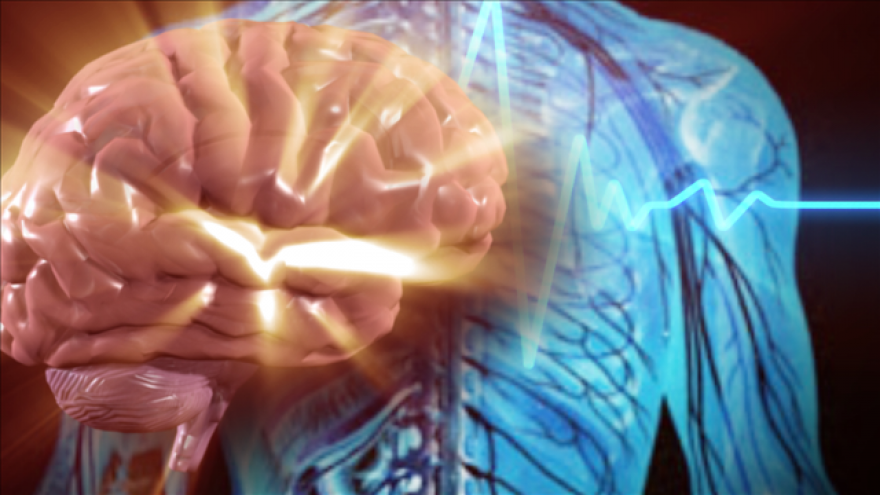 (CNN) -- A man paralyzed from his shoulders down has regained use of his right hand with the aid of an experimental prosthetic that replaces lost connections between the brain and the muscles.

As described in a paper published Tuesday in the journal The Lancet, this technology, called a neuroprosthetic, works by first decoding the patient's brain signals and then transmitting them to sensors in his arm.

The early stage research has been tested in a lab with just one patient so far, yet someday it may change the lives of many with spinal cord injuries, said lead author Abidemi Bolu Ajiboye, an assistant professor at Case Western Reserve University.

Even though the system would not become immediately available to patients, Ajiboye believes that all the technical hurdles can be overcome within five to 10 years. "We actually have a handle on everything that we need. There are no significant novel discoveries we need to make for the system," he said.

Ajiboye said that what makes this achievement unique is not the technology, but the patient. Unlike any previous experiments, a man who is nearly completely paralyzed -- or tetraplegic -- regained his ability to reach and grasp by virtue of a neuroprosthetic.

Bill Kochevar, a resident of Cleveland, injured his spinal cord in 2006 prior to enrolling in the study.

"It was a bicycling accident," said Ajiboye, who explained that Kochevar, 53, was doing a 150-mile bicycle ride on a rainy day. "He was following a mail truck and the mail truck stopped and he ended up running into the back of the truck," said Ajiboye. As a result, Kochevar has paralysis below the shoulders.

While the American Spinal Injury Association classifies him at the most disabled level of paralysis, Kochevar is capable of both speaking and moving his head. Prior to enrolling in the study, he often used head tracking software technology that relied on him moving his head to move a cursor on a screen. "But he had no ability to do any sort of functional activities," said Ajiboye.

Kochevar underwent two surgeries fitting him with the neuroprosthetic. The first operation on December 1, 2014, implanted the brain computer interface, or BCI, in the region of Kochevar brain that is responsible for hand movement, called the motor cortex.

The BCI is an electrode array which penetrates the brain between one to one and a half millimeters, said Ajiboye.

Next, Kochevar underwent a second surgery to implant 36 muscle stimulating electrodes into his upper and lower arm. Known as functional electrical stimulation or FES, these electrodes are key to restoring movement in his finger and thumb, wrist, elbow and shoulders.

After the separate technologies were implanted, the researchers connected Kochevar's brain-computer interface to the electrical stimulators in his arm. At this point, Kochevar began learning how to use his neuroprosthetic and that process started with a virtual arm.

This electrical activity was recorded and based on this recording, Ajiboye and his colleagues created a "neural decoder" --- an algorithm specific to Kochevar -- that could translate the patterns of Kochevar's recorded brain signals into commands for the electrodes in his arm.

"Then we had him use our algorithm to control the virtual arm on the screen just using his brain signals," said Ajiboye. "Very early on he could hit the target with 95 to 100% accuracy." This 'virtual' step in the process helped Ajiboye and his colleagues refine the algorithm.

"Then, finally, we basically do the same thing with his actual arm. We manually move his arm, and we have him imagine he's doing it," said Ajiboye. Kochevar is then able to move his arm on his own by thinking the command (and so generating once again the same brain pattern when he imagined moving his arm) and this is then actuated through electrical stimulation.

Essentially, the technology circumvents the spinal injury feeding the electrical stimulation of his brain through wires to the electrodes in his arm.

After mastering simple movements, Kochevar was tested on day-to-day tasks, including drinking a cup of coffee and feeding himself. In all of these, Kochevar was successful.

"There were no significant adverse events, the system is safe, so as far as the clinical trial endpoint goes, he has met those," said Ajiboye.

"Now he has opted voluntarily to continue working as a participant in our study for at least another five years," said Ajiboye. Kochevar hopes to experience the benefits of the technology for himself while also seeing it advance to the point of becoming available for other people with spinal cord injuries, according to Ajiboye.

According to Andrew Schwartz, a professor of neurobiology at the University of Pittsburgh, the new study "shows the potential that [a brain-machine interface] can be used to reanimate a limb." Schwartz was uninvolved with the current study.

While the "generated movements were somewhat rudimentary" with a rather limited range of action, "the attempt to use multiple degrees of freedom was encouraging," said Schwartz.

"I liked the idea that movements were decoded first and then transformed to muscle activations," he added. "For real movements in the real world, this transformation will be very difficult to calculate and that is where real science will be needed."

In an editorial published alongside the study, Steve I. Perlmutter, an associate professor at University of Washington in Seattle, said the research is "groundbreaking as the first report of a person executing functional, multijoint movements of a paralysed limb with a motor neuroprosthetic. However, this treatment is not nearly ready for use outside the lab."

Similar to Schwartz, Perlmutter noted that Kochevar's movements were "rough and slow" and had limited range due to the necessary motorized device.

"Stimulation of nerves or the spinal cord, rather than muscles, and more sophisticated stimulation technology may provide substantial improvements," wrote Perlmutter.

"The algorithms for this type of brain computer interface are very important, but there are many other factors that are also critical, including the ability to measure brain signals reliably for long periods of time," Perlmutter said in an email. He added another critical issue is execution of movement.

Hurdles that all motor neuroprostheses must overcome have yet to be addressed, noted Perlmutter, including "development of devices that are small enough, robust enough, and cheap enough to be fully mobile and widely available."

Ajiboye acknowledges the need for smaller technologies. Still, he said, his new study differs from previous work done in the field. Although other labs have worked with non-human primates or partially paralyzed participants, his study helped someone who is completely paralyzed.

"This is an exponentially harder problem," said Ajiboye. "Our study is the first in the world, to my knowledge, to take someone paralyzed and give him the ability to both reach and grasp objects... so that he can regain the ability to perform functional activities of daily living."

One other way the new study differs from previous research is Ajiboye and his colleagues built their neuroprosthetic from separate technologies, each of which had already been proven viable. This translates to the entire system, when refined, more easily gaining approval and becoming available to patients.

"The goal is to do much more than a cool science experiment," said Ajiboye.

Today 77° Mix of sun and clouds