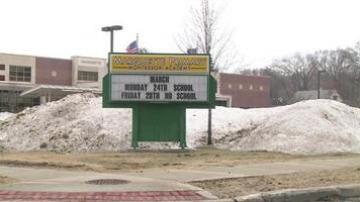 SOUTH BEND, Ind. -- A local parent says she dropped her kindergartener off at school one morning, then found out hours later her daughter had been released to someone who wasn't on her daughter's contact list.

Melanie Ellis says last week she got a terrifying call.

"Oh my heart stopped when I actually heard my baby's voice go 'Mommy I'm okay.' It kind of just shocked me. I'm like wait a minute, how did you get with her? You're not supposed to be with her. You're supposed to be at school," said Ellis.

That morning she dropped her daughter off at Marquette Primary Montessori Academy.

"I kissed my daughter good bye, told her I loved her," said Ellis.

When 6-year-old Trinity got sick, she was sent home early from school.

But the person she left school with wasn't her mom and wasn't on the emergency contact list.

Ellis says she hasn't talked to the person who picked up Trinity in years.

"I asked her I said, 'Did you even have to show ID to get my daughter?' She said they did not even ask for ID," said Ellis.

The school district says "It was later learned that this emergency contact person was only listed for the student's sibling. Information was linked in our system in error." (See full statement below)

Ellis says when it comes to her daughter or any other student, there's no room for error.

"I know mistakes happen but my daughter should not have been able to walk out of that school with somebody that she was not supposed to walk out with," said Ellis.

School district officials say all schools in the district have been asked to review their process for releasing students.

Students may be released to any person that a parent indicates on their child's emergency card.  In a situation last week, a school needed to send a sick child home and was not able to reach the parent.  The school contacted a person listed on the student’s emergency contact portion of our electronic student management system, PowerSchool.  It was later learned that this emergency contact person was only listed for the student's sibling.  The two siblings’ emergency contact information was linked in our electronic student management system in error.  This has been since been corrected.  All schools have been asked to review their process for releasing students.