Passenger bus involved in multi-vehicle pileup on I-94 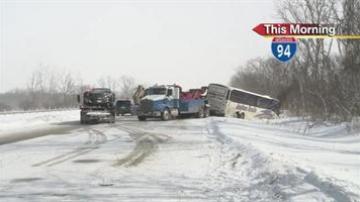 WATERVLIET, Mich. -- Two multi-vehicle pileups happened in the eastbound lanes of I-94 Thursday. One of the accidents involved an Indian Trails bus, several semis and cars.

Wind, snow and cold temperatures turned I-94 icy. There were many slide-offs and accidents.

The big pileup near mile marker 46 around 10 a.m. sent 24 people to Lakeland Hospital in Watervliet.

Most patients were released but the driver of the Indian Trails bus is in critical condition.

“She was bleeding from her forehead down and we moved her from the seat which was pushed up against the console which was completely dismantled. So we moved her up to the front seat and we saw blood on her right ankle," said bus passenger Bobby Hurst.

Hurst was on his way to Grand Rapids to start a new job. He says he’s glad to be alive.

He says he owes his life to the driver of the bus.

“Grateful. Appreciative of the job that she did and the job done by the EMTs and the state patrol they were all excellent, very professional," said Hurst.

Michigan State Police say speed was a major factor in the accidents. They say when road conditions get bad, slow down.

“We just want to remind everyone to use caution, the speed limit may say 70 but with the road conditions you’ve got to adjust your speed slower and slow it down," said Trooper Dennis Diggs of the Michigan State Police.

Many of the passengers who were released from the hospital caught another bus and were able to continue to their destination.