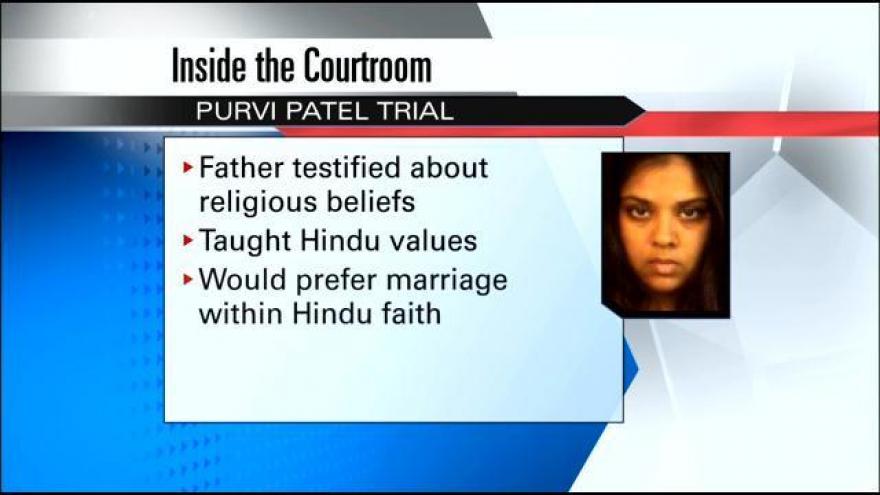 SOUTH BEND, Ind. - The state rested its case in the trial of Purvi Patel on Friday. The defense began presenting its case and called her parents to the stand.

Her parents, Nic and Kunja Patel, testified they didn't know their daughter had a secret lover or that she was pregnant.

They both said they didn't see any changes in their daughter in July 2013, when the baby was born.

Nic Patel testified their household is strictly Hindu and that he taught the religious principles of no sex outside marriage.

He also testified he would prefer his daughter married within the Hindu faith but would love her regardless.

When asked if he would love a grandchild born out of wedlock, he replied he would have welcomed the baby.

The defense also called their own pathologist, Dr. Shaku Teas.

Teas testified there was no evidence of a live birth and the flotation test conducted by Dr. Prahlow was worthless.

Teas did not physically examine the baby.

Teas testified the baby was between 22 and 23 weeks gestation.

Saying there were no acts of commission on the baby.

A juror asked, if cutting an umbilical cord would count as an act of commission, Teas replied that a person may not know if what they are doing is "right or wrong."

Her finding of 22-23 weeks gestational age differed from all the states experts.

Dr. Joseph Prahlow, the pathologist to perform the autopsy concluded at least 25 weeks of age.

They all concluded the baby was over 24 weeks, which is the age of viability, meaning the baby had a chance of survival with medical attention.

In the states cross examination of Dr. Teas, they presented charts from a medical book that Dr. Teas testified was reputable.

The book contained charts of average weights for babies based upon their gestational age.

Attorney Mark Roule pointed out that baby Patel weighed in at 660 grams, and this is after the baby had lost a significant amount of blood.

The chart determined that a baby weighing 663 grams which is the area baby Patel best fits would be at least 26 weeks gestation.

According to the prosecution this means, at birth the baby was at least this weight and age or more.

Disputing the testimony of Dr. Teas who testified she believes baby Patel was 22- 23 weeks of age.

Monday the state will begin with a rebuttal, bringing Dr. Prahlow back in for a second testimony.

Patel is charged with one count of feticide and one count of neglect of a dependent. Her newborn was found in a dumpster behind Moe's Southwest Grill in July 2013.