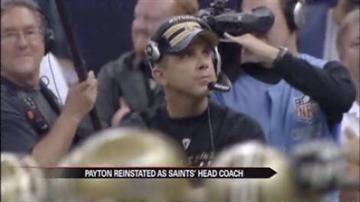 NEW ORLEANS — After a full season away, New Orleans Saints' head coach Sean Payton has been re-instated by the NFL. Payton was suspended last year by the NFL for his involvement with a  bounty scandal.

ESPN said the coach said was suspended for failing to put the brakes on a "cash for hits" bounty program.

The program was reportedly run by the defensive coordinator from 2009 to 2011.