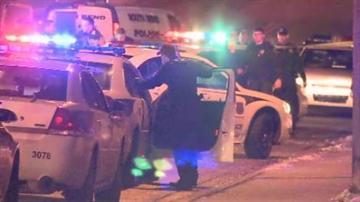 The 911 call came from inside the house as burglary in progress just before 10 p.m.

When they arrived, police stormed the home armed with assault rifles to get to the victims stabbed after learning the suspects were still inside the home.

According to police, five men broke into the house while the family and four friends were inside.

An elderly couple, their daughter and two of the girl's friends were all stabbed during the home invasion, according to investigators.

The elderly woman is in critical condition after police found her in an upstairs bedroom with multiple stab wounds, including severe injuries to her neck.

The injuries were so severe that Metro Homicide was called in to conduct the investigation.

Police told ABC 57 that the five suspects were all taken into custody.

One knife was found inside the home.

It is still unclear if the victims knew the intruders.