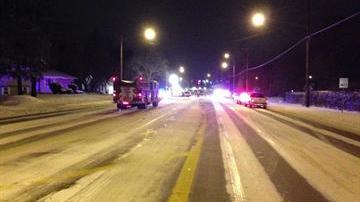 ST. JOSEPH COUNTY, Ind. -- One man is dead and two others are in the hospital after a deadly car crash in St. Joseph County.

Police say the driver lost control of his car and slid into a mini van traveling in the opposite direction. Witnesses told police that the man was traveling at an extremely high rate of speed and weaving through traffic when the crash happened.

The driver of the car, a 30-year-old man from Mishawaka, was pronounced dead at the scene. The two passengers in the mini van, and elderly couple in their 70s, were taken to the hospital after suffering only minor injuries.

Cleveland Road was closed in both directions between Juniper and Emmons Roads for nearly two hours while firefighters worked to extricate the man from the car.

The cause of the accident is still under investigation, but police say that speed, as well as the snowy conditions, are believed to be factors. At this time, police do not believe alcohol was a factor.