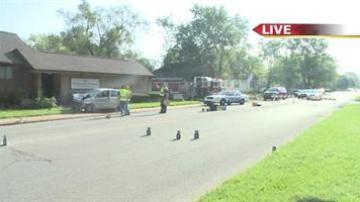 MISHAWAKA, Ind. -- Police said a pedestrian was hit by a car on Jefferson Boulevard near Liberty Avenue Thursday morning around 7 a.m.

The pedestrian, Tiffany Brantley, was taken to the hospital in critical condition.

Witnesses said a man driving a car was speeding down Jefferson Boulevard.

The witness said he was screaming out of the window at a woman walking along the sidewalk.

Then the driver crossed lanes and hit the woman intentionally, according to the witness.

Both the driver and the pedestrian were taken to the hospital.

The driver, Quentin Burnley has been charged with causing serious bodily injury when operating a motor vehicle while intoxicated.