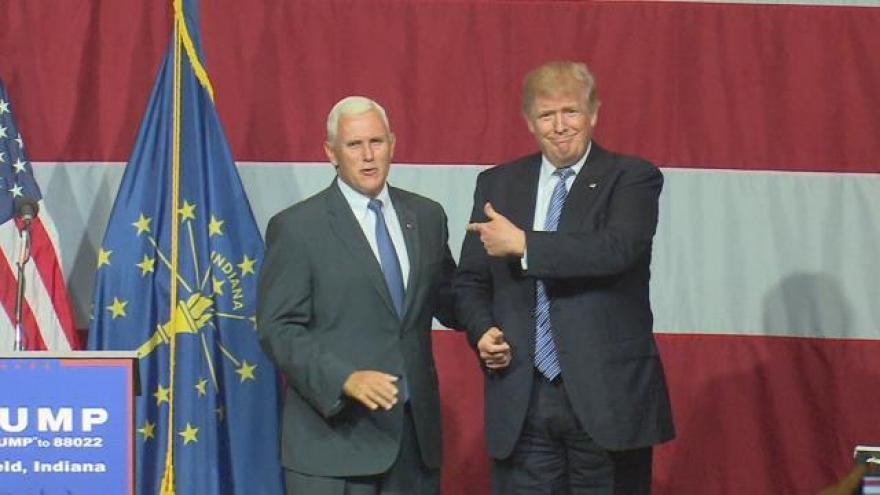 (CNN) -- Vice President Mike Pence is increasing the pressure for Republicans to pass health care legislation, calling on senators to "step up to the plate" and keep their seven-year promise.

"A few Republicans in the Senate weren't quite ready to move forward on legislation to repeal and replace Obamacare," Pence said during his keynote address at the Ohio Republican Party state dinner Saturday. "Now some people around the country harbor the belief that Democrats will help us clean up the mess they made, but as I said, and the President said this morning, Republican senators must step up to the plate after seven years and vote to repeal and replace Obamacare."

The elevated rhetoric comes as the Republican health care legislation hangs by a tenuous thread.

The Senate is expected to vote on a plan to overhaul the Affordable Care Act next week, but what exactly that will be has yet to be announced. The Senate Republican leadership is urging members to pass a procedural vote to begin debate, but with Arizona Sen. John McCain out as he deals with newly diagnosed brain cancer, Majority Leader Mitch McConnell can only lose one member of his conference and still advance a bill.

As of now, there's no indication the votes are there.

"We're going to vote on whether to proceed to a bill," Majority Whip John Cornyn of Texas said Thursday. "And I know people are fixated on what bill are we going to vote to proceed on -- but the problem with that is that this is a unique process where every senator can offer amendments to change the bill. So it really is irrelevant what technical vehicle we proceed to. This is just strictly, are we going to start the debate, so people can offer amendments and so we can at some point finish."

"The Republican Senators must step up to the plate and, after 7 years, vote to Repeal and Replace," Trump wrote. "Next, Tax Reform and Infrastructure. WIN!"

"ObamaCare is dead and the Democrats are obstructionists, no ideas or votes, only obstruction," he continued in a follow-up tweet. "It is solely up to the 52 Republican Senators!"

Pence reiterated the message Saturday night, saying he and the President "are going to keep fighting every single day until this Congress puts this bill on [Trump's] desk."

"President Trump said it plainly the other day when he had every senator over to the White House," Pence added. "He said he had pen in hand. He's ready to act and the Senate health care bill, we believe, is the right bill at the right time to begin to repeal and replace Obamacare."

For now, the Trump administration is trying to come up with some kind of Obamacare replacement bill that will satisfy moderates. Centers for Medicare and Medicaid Services Administrator Seema Verma has been meeting in both group and individual settings with moderate hold-outs, hoping to convince them that there is a way to protect low-income people in their states once Medicaid expansion ends.

A new Congressional Budget Office score Thursday showed that Republicans had more than $200 billion more to spend on health care and still make their budget target. That may give leaders and the White House some room to negotiate.

But spending more money to win votes is making some Republicans uncomfortable.

"It's beginning to feel like there is a lack of coherency in what we're doing, and it's almost becoming a bidding process. Let's throw $50 billion here, let's throw $100 billion there. And again, it may write itself, but it's making me uncomfortable right now," said Tennessee Republican Sen. Bob Corker.