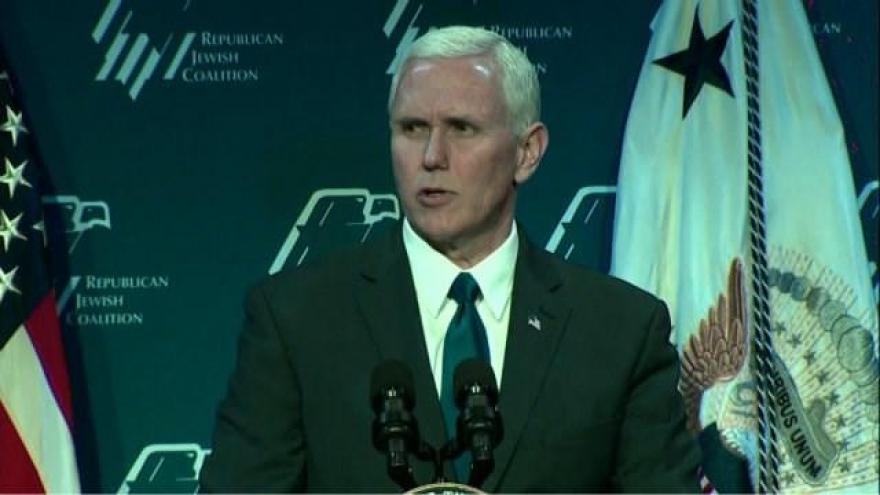 LAS VEGAS (CNN) -- Vice President Mike Pence delivered an ode on Friday evening to the Republican Jewish establishment that once was deeply skeptical of his boss, effusively praising several GOP luminaries such as billionaire Sheldon Adelson.

Speaking before a Shabbat dinner at Adelson's landmark Venetian hotel and casino, Pence shared his administration's platform on Israel with several hundred members of the Republican Jewish Coalition, including a pledge to keep Iran from acquiring a nuclear weapon and to combat the "endless bias" of the United Nations.

"We're going to keep our end of the bargain," Pence said here on the Las Vegas Strip. "If the world knows nothing else, the world will know this: America stands with Israel."

But Pence broke from his usual script to offer extensive thanks to two senior Republicans who have bolstered his political career. He was introduced by the last Republican vice president, Dick Cheney, who Pence has described as his role model in the office.

"The job has taken on increasing significance over the years, and I think that's all too good," said Cheney, one of the most powerful vice presidents in recent memory.

Pence also offered a long message of thanks to Adelson, the country's most prolific GOP donor who sat at the center table as the biggest contributor to the Jewish group. Pence and Adelson met privately just before his formal remarks, a sit-down during which Pence said the pair discussed the Israeli-Palestinian peace process.

"Your leadership, I believe, will impact this nation and the Jewish state of Israel for generations to come," Pence told Adelson from the dais. Adelson's RJC was at times only tepidly in support of Trump during the general election, and Adelson was slow to spend his fortunes on Trump's behalf. But Pence seemed willing to forget that on Friday evening.