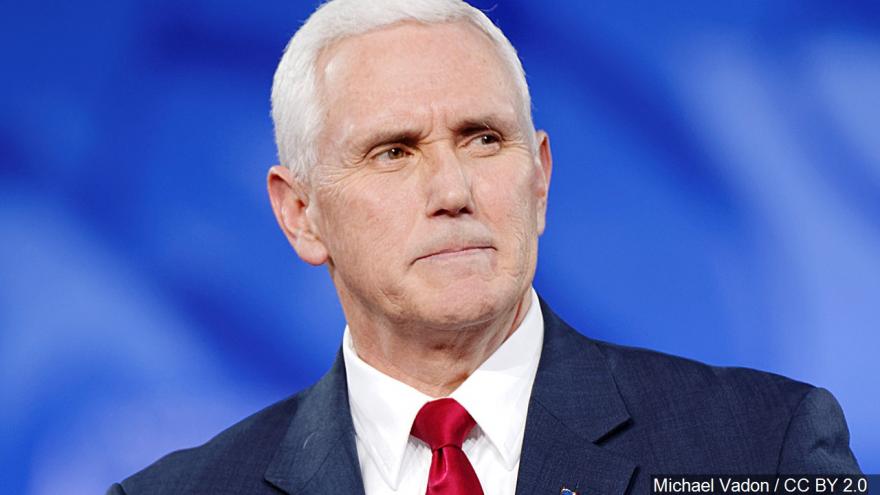 WASHINGTON (CNN) -- Vice President Mike Pence spoke forcefully about reining in North Korea's nuclear program during his trip to Estonia on Sunday, saying that "all options are on the table" in countering the threat.

"The continued provocations by the rogue regime in North Korea are unacceptable, and the United States of America is going to continue to marshal the support of nations across the region and across the world to further isolate North Korea economically and diplomatically," Pence told reporters.

"We believe China should do more," Pence said. "The President has been clear about that in his conversations with President Xi (Jinping) that while China has taken unprecedented steps to begin to isolate North Korea economically and to bring diplomatic pressure, we believe China has a unique relationship with the regime in North Korea and has a unique ability to influence decisions by that regime."

US Ambassador to the United Nations Nikki Haley also tweeted Sunday morning about the administration's desire for China and other nations to put pressure on Pyongyang, writing, "Done talking about NKorea. China is aware they must act. Japan & SKorea must inc pressure. Not only a US problem. It will req an intl solution."

In a statement on Twitter on Sunday afternoon, Haley dismissed reports that Washington is seeking an emergency UN Security Council meeting, saying, "North Korea is already subject to numerous Security Council resolutions that they violate with impunity," and "China must decide if it is finally willing to take this vital step" of challenging Pyongyang.

"The time for talk is over," Haley said. "The danger the North Korean regime poses to international peace is now clear to all."

The remarks come two days after North Korea tested a ballistic missile that it claims can reach all of the United States. China, a longtime North Korean ally, issued a statement Saturday condemning the missile launch and asked Pyongyang to "stop taking actions that would escalate tensions" on the Korean Peninsula.

In a pair of tweets Saturday, Trump also slammed China for not taking stronger action.

"I am very disappointed in China," Trump tweeted. "... they do NOTHING for us with North Korea, just talk. We will no longer allow this to continue. China could easily solve this problem!"

In a show of force on Sunday, the US military said it conducted a successful missile defense test in the Pacific Ocean amid the growing tensions.

US forces tested the Terminal High Altitude Area Defense (THAAD) system in Alaska by launching a ballistic missile, which was then detected, tracked and intercepted over the Pacific Ocean, according to the military.

Pence's visit to Estonia is the first leg of an Eastern European trip that will also take him to Georgia and Montenegro to show US support for them and NATO in the face of what the administration has called Russia's destabilizing activities in Ukraine and elsewhere and its efforts to undermine the alliance. The trip comes amid rising tensions between the US and Russia over a new sanctions bill that easily cleared Congress last week and that the White House says Trump is expected to sign.

Passage of the bill prompted Russia to retaliate by cutting US diplomatic missions by 755 people, which Moscow announced Friday -- an in-kind response to penalties that would be codified by the legislation, including the ejection of Russian diplomatic staff and closure of two Russian compounds in the US, for its alleged meddling in last year's election and aggression in Ukraine.

"We waited a long time for things to perhaps change for the better," Russian state media quoted Russian President Vladimir Putin as saying Sunday. "We had such hope that the situation would change, but judging by the situation that will not be soon."

On taking retaliatory measures, Putin said, "I thought it was time for us to show that we will not leave this without an answer. As for other possible measures, or whether it is a lot or not, this is quite sensible from the point of view of the work of the diplomatic department. ..."

Russian Deputy Foreign Minister Sergei Ryabkov threatened further retaliation against the US on Sunday morning, saying that if that US goes through with the sanctions, "we will respond in kind," but he would not specify how Russia plans to respond.

Pence said Sunday that he hopes that slapping new sanctions on Russia would lead Russia to change its behavior with regard to Ukraine and end its support for Iran and North Korea.

"The President and I remain very hopeful that we'll see different behavior by the Russian government, with regard to Ukraine, with regard to supporting rogue regimes in Iran and North Korea," Pence said. "We continue to believe that if Russia will change its behavior, our relationship can change for the good and improve for the interests in both of our countries and the interest of peace and stability in this region and around the world."

Pressed on how to square the purpose of his trip with Trump's position on Russia's alleged efforts to influence last year's election, Pence defended the President. He insisted Trump is in agreement with US intelligence services on Russian meddling despite newly appointed White House communications director Anthony Scaramucci telling CNN last week that Trump is still unsure.

"The President has confirmed repeatedly that we believe Russia did meddle in US elections," Pence said. "I think he has also said it could have been other actors as well. But he's confirmed his belief and our intelligence that Russia was involved in meddling in US elections and it's part of what inspired the bipartisan action in the Congress to codify the sanctions that our administration has been implementing against Russia and will continue to advance that."