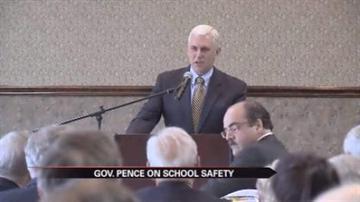 He touched on a wide range of topics including tax reform, the bombings in Boston and guns in schools.

Governor Pence said he wants to prevent a tragedy like the one in Newtown from happening here.

"We've been really focused on school safety issues, we've brought together a number of agencies to focus on how we can make sure that in the Hoosier state, a crisis and tragedy that happened in Newtown won't happen here," said Governor Pence.

Governor Pence also made a stop in Middlebury and announced plans for an RV expansion.

Grand Design plans to move its headquarters and manufacturing to a 67-acre campus on County Road 2.