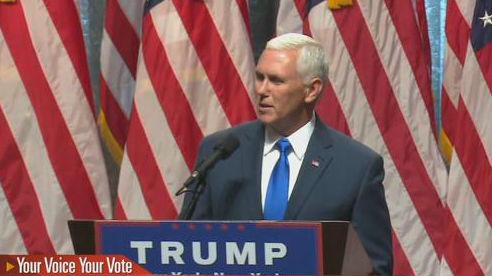 Christie, who began leading the presidential transition in the months before Trump's surprise victory, will now serve as a vice-chairman to the transition effort alongside Sen. Jeff Sessions of Alabama, retired Army Lt. Gen. Mike Flynn, former New York City Mayor Rudy Giuliani, Dr. Ben Carson and former House Speaker Newt Gingrich, all of whom have been close confidantes of the billionaire during his presidential campaign.

"I am proud to have run the pre-election phase of the transition team along with a thoroughly professional and dedicated team of people," Christie said in a statement.

Trump said in a statement that Pence "will build on the initial work" Christie accomplished "to help prepare a transformative government ready to lead from day one.

"The mission of our team will be clear: put together the most highly qualified group of successful leaders who will be able to implement our change agenda in Washington. Together, we will begin the urgent task of rebuilding this nation -- specifically jobs, security and opportunity," Trump said.

Trump also announced a 16-member executive committee advising the transition efforts composed of Trump's children, some of his top political supporters and some of the top advisers to his campaign, including Republican National Committee Chairman Reince Priebus and campaign CEO Steve Bannon, who are both leading contenders to be named White House chief of staff.

Trump also formalized the staffing of his transition team, including naming Sessions' chief of staff, Rick Dearborn, as executive director.

Dearborn, a longtime Sessions aide, had been working on the transition for some time as a chief legislative affairs and policy official and was the organizer of Trump's campaign policy shop in Washington before that.

Trump's senior campaign staff will also transition to roles with the presidential transition organization, largely retaining the same roles they had with the campaign. Campaign manager Kellyanne Conway will serve as senior adviser.

Pence, the governor of Indiana and a former member of Congress, is not the first vice president to lead transition efforts. Former Vice President Dick Cheney played a leading role in the transition leading up to George W. Bush's presidency.

"This is what Bush did post election with Cheney. I saw tweets on demotion. That's the absolutely wrong take," the aide said.

Pence was tapped for the post in part because of his deep and longstanding relationships with both Republicans on Capitol Hill and Republican governors. The role will complement Pence's efforts during the campaign in urging Republicans to rally around Trump's candidacy.

The decision to backbench Christie comes as the New Jersey governor faces intensifying scrutiny over his role in lane closures of the George Washington Bridge after two of his former aides were convicted in the scandal. Christie has denied any wrongdoing, but federal authorities continue to probe his role in the incident.

Several sources familiar with the process said the Bridgegate scandal and questions over Christie's loyalty to Trump were factors in the decision. While Christie was one of Trump's earliest prominent backers, he disappeared from the public eye after the surfacing of the 2005 "Access Hollywood" tape in which Trump bragged about groping women.

Christie has also had a tenuous relationship with Trump's son-in-law Jared Kushner, who has been intimately involved in transition efforts, stemming from Christie's prosecution of Kushner's father.

'It's kind of chaos'

Sessions had taken on much of the leadership of the planning effort, the sources said, despite Christie retaining the chairman title. While Christie had made frequent visits to D.C. early in the transition process, he was not seen in the office for weeks leading up to the election.

That left the transition in a state of shock when Trump was elected. Though they had done the work to prepare a Trump administration, the mogul himself had not been actively involved and staff weren't immediately able to put plans into action.

"I think it's kind of chaos. I don't think anyone was ready for what happened," the source said. "They have a plan in place, it's just a question of whether Trump's OK with it."

The reshuffling of the transition and addition of many of the campaign's heavy hitters -- who had been detached from the transition as they worked toward the election -- comes the first day that Trump has held a meeting with his transition team.

With Trump's engagement, the transition is expected to now be able to get going in earnest on planning his agenda, developing policy and vetting and naming Cabinet officials.

The transition team compiled possible names for Cabinet positions in advance, but has added vetting staff in recent days to be able to begin the process of clearing those names ahead of what will likely be tense Senate confirmation hearings in the new administration, according to a source familiar with the process.