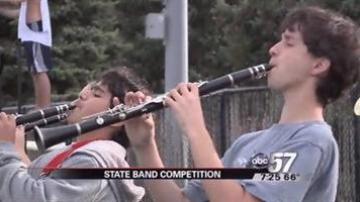 This is the 9th year in a row that the Penn High School Marching Kingsman have been to the state finals, and 14th time overall. Students have been practicing the routine since early this summer. The director says they're ready for the competition.

“It’s nice to come into a situation where students are motivated by themselves,” says Assistant Band Director Chris Paulson. “They know what it takes to be good and that just makes life easier and more fun.”

Penn High School will be one of 10 marching bands performing. The state competition is this Saturday at 8 o'clock in Lucas Oil Stadium in Indianapolis.

Other local schools performing this weekend include Goshen and Concord.