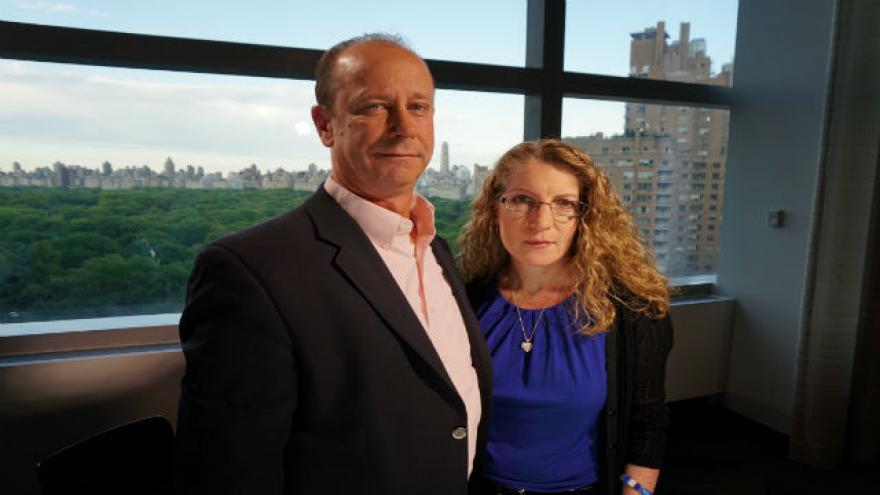 (CNN) -- On the first night of pledge initiation last winter at Penn State's Beta Theta Pi house, a 56-year-old, live-in fraternity adviser and employee of the university's football team watched from a balcony as the would-be brothers filed in.

Hand to shoulder, the mostly teenage pledges entered the meticulously renovated red brick mansion across from Penn State's campus, a police detective testified in a criminal case stemming from that fateful night. Among them was Timothy Piazza, a 19-year-old sophomore who would leave the house more than 12 hours later on a stretcher, unconscious -- and would never wake up.

The fraternity adviser, Tim Bream, is now under scrutiny from two parties that until this point have stood firmly on opposite sides of this case: Piazza's grieving parents and the fraternity brothers charged in his death.

On this singular but potentially critical element, the Piazzas and the fraternity members now find themselves aligned in a common desire to hear what Bream has to say about the events surrounding Tim Piazza's death.

The moment could come sooner than later.

A judge on Wednesday, the sixth day of a preliminary hearing that began in June, will hear arguments over whether Bream should be held in contempt for failing to show up to court in early August.

Following that hearing, Bream could give his much-anticipated testimony.

Bream has not been charged with a crime, and through his attorney, he has declined to comment to CNN.

But late Tuesday, Bream's lawyer filed a motion to prevent his client's testimony or to limit the scope of what he could be asked. The motion also claims Bream has acted appropriately, cooperated with police, and was not properly served a subpoena before he failed to show up to a previous hearing.

It also states that Bream consistently reiterated when he spoke with Beta Theta Pi brothers that "hazing was not tolerated." Eighteen Beta brothers face charges ranging from tampering with evidence to involuntary manslaughter in connection with Piazza's death. Some of them are expected back in court Wednesday.

Throughout the testimony, Timothy Piazza's parents, Jim and Evelyn Piazza, have publicly excoriated the accused fraternity brothers, calling them "callous" and "inhumane." Jim Piazza has slammed the brothers' behavior in court as flippant, and he often has remarked quietly during defense cross-examination, making his disapproval of their testimony clear.

Meanwhile, defense attorneys for the fraternity members have intimated through their questions that Bream may hold some responsibility for Piazza's death.

"(Bream) was the captain of his ship. He's in charge of everything that goes on in the ship," one defense attorney, Leonard Ambrose, told reporters. "I'm not saying he's responsible (for Piazza's death), I'm saying I want to know what his rights and obligations were."

"He was the liaison between the fraternity and Penn State," Ambrose said. "I think that's very important because ... what was going on (at) pledge acceptance and the other events (was) consistent with the previous semester and going back."

While the Piazzas have stopped short of publicly calling for Bream to be charged with a crime, they have demanded that Penn State President Eric Barron fire him from his job as the football team's head trainer. So far, that hasn't happened.

"(Bream) had to know that there were illegal parties going on in that house for years that he lived there," Jim Piazza told CNN this summer. "He has a responsibility as an adult, as an adviser, as part of the university staff, to speak up when he sees something going wrong. He didn't. He allowed a young man, my son, to die on his watch."

In his Tuesday motion, Bream's attorney, Matthew D'Annunzio, states that surveillance footage shows that Bream went to bed at the fraternity house after watching the "bid acceptance" ceremony and "acted properly, that night and in the morning."

Bream fully cooperated with police, encouraged brothers to do the same, and is the person who alerted police to a surveillance tape inside the house, the motion states.

"He had no awareness of any hazing, extensive drinking, or of the injuries suffered by Mr. Piazza whatsoever," the motion states. "It is clear that the defense tactic is to confuse the issues and mislead the Court, and eventually the jury, by blaming Tim Bream when he had no role in the injuries."

Penn State in a statement told CNN that Bream advised Beta Theta Pi "on his own time and not as a representative of the University," adding that while Penn State is investigating what happened that night, personnel matters "are confidential."

Regarding the subpoena, "we have communicated that Mr. Bream should accept service of the subpoena and appear in court," the Penn State statement said.

Following Piazza's death, Penn State permanently banned Beta Theta Pi from operating on campus. The fraternity at Penn State was supposed to have been alcohol-free at the time Piazza died, the result of a suspension eight years earlier.

The prosecutor has said there's not enough evidence to prove Bream committed a crime in this case.

"It's another attempt, of course, to blame someone else," District Attorney Stacy Parks Miller of Centre County, Pennsylvania, argued in court.

'The gauntlet' -- and who knew what

Bream's assertion in the motion filed Tuesday that he was in his bedroom during the initiation ritual and the hours Piazza was injured echoes testimony heard by the grand jury and offered by the police detective.

The event, dubbed "the gauntlet," happened after "bid acceptance" and forced pledges through an obstacle course rooted in alcohol consumption -- and it was the first domino to fall in the sequence that lead to Piazza's death, prosecutors have said.

Surveillance video from inside the house shows Piazza stumbling after "the gauntlet" near the basement stairs. Minutes later, he is carried to a couch, apparently unresponsive, according to the video, which has been played in court.

Over the next 12 hours, his condition seems to deteriorate as the video shows him stumbling and repeatedly falling, slowly dying from what prosecutors later described as brain and spleen injuries.

The surveillance tape does not show Bream, which is a key reason Parks Miller did not charge him, she told CNN.

But early in the preliminary hearing, defense attorneys suggested that Bream knew what was happening at the Beta house, court transcripts show.

Evan Kelly, a lawyer for one of the fraternity members, asked a State College police detective: "Are you aware that Tim Bream personally approved 'the gauntlet?'"

The prosecutor lodged an objection, which the judge sustained, and the detective never answered the question.

Later, another defense lawyer, Steve Trialonas, asked the detective: "During your interview with Tim Bream, did he inform you that my client asked him for permission to run the bid acceptance and initiation event?"

"Did he tell you that commonly the boys would ask his permission before having any drinking events?" Trialonas asked.

"In reviewing the full video, is there a point where Tim Bream and my client are observed interacting with each other on the night of February 2, 2017?" the lawyer asked.

In the motion filed Tuesday, D'Annunzio writes: "(Bream) did not know of, approve of, or witness any hazing or activities where the new pledges were supplied with alcohol."

After Piazza was taken to the hospital, the Beta Theta Pi students tried to clean up evidence of alcohol and hazing, prosecutors have alleged.

New charges may be filed in connection with what police suspect is the deletion of a part of the surveillance video, Parks Miller suggested in court this month. The footage was retrieved by Bream, police have said -- something several defense team members have pointed out in court.

Text messages introduced in court by prosecutors show some fraternity members also deleted a GroupMe chat. One text message recovered from a brother's phone said it was "Tim's idea" to delete "as a precaution" so that screen shots of the messages wouldn't be "leaked to the media." The police detective identified "Tim" as Tim Bream during court testimony.

"If an employee of Penn State is instructing these boys to delete things from media and they get charged with tampering, I think it's highly relevant," defense attorney Frank Fina said in court.

Countered Parks Miller: "You know what this case is not about is, like, trying to say, 'Well, if my client is charged, somebody else should have been, too.'"