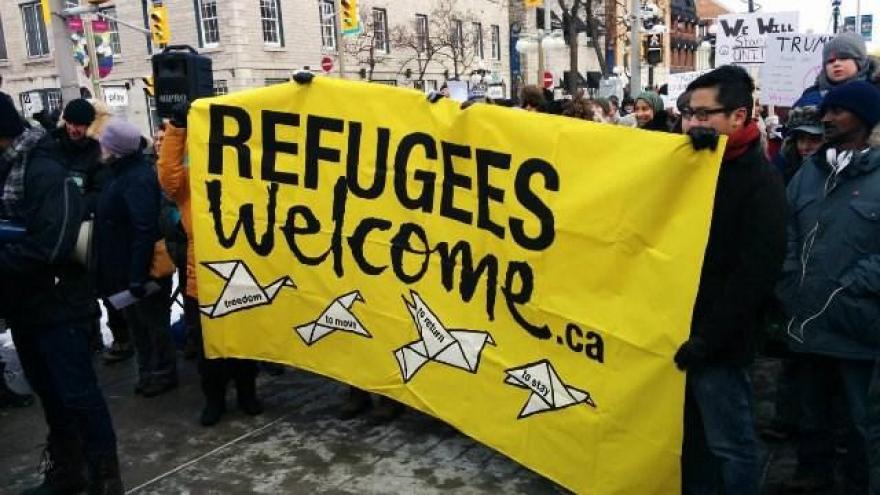 (CNN) -- Thousands of Londoners, incensed by US President Donald Trump's new immigration policies, took to the streets Monday to let the world's immigrants and refugees know they stand with them.

From Trafalgar Square to Parliament Square -- a roughly half-mile stretch wedged between St. James Park and the Thames River that includes 10 Downing Street -- the throng lofted signs above their heads and chanted, "Hey, hey! Ho, ho! Donald Trump has got to go!"

Their placards -- not all rated PG -- made clear protesters' message to the American President, who drew their anger with an executive order temporarily barring entry to the United States from seven Muslim-majority countries. It also bans all refugee admissions for the next 120 days.

"Refugees welcome here," read a sign. Another said, "Compassion not complicity." One more repudiation of the travel ban read, "Your hate does not belong in our country." Illustrations of Trump controlling UK Prime Minister Theresa May like a marionette were also popular.

In Glasgow, Scotland, protesters took to George Square to express their displeasure, with one attendee holding a sign that said, "Trumpty Numpty wants a big wall, Trumpty Numpty really should FALL." In the capital of Edinburgh, marchers carried a "Scotland against Trump" banner down a main thoroughfare.

In Manchester, Brighton and Hove, Ipswich, Newcastle, Bristol and Falmouth, protesters braved the cold -- and in Bristol, a chilly rain -- to make their voices heard.

The protests in England and Scotland come on the heels of a weekend of American demonstrations targeting the travel ban.

Protesters sang and chanted: "No hate, no fear, immigrants are welcome here." At airports, the crowds waved signs in solidarity with travelers stuck inside -- students, doctors, professors and refugees. They cheered as affected travelers left airports and reunited with loved ones.

At Terminal 4 of John F. Kennedy International Airport, protesters decried the detention of two Iraqis who were later released.

Airport officials for the most part accommodated the protests, temporarily closing security checkpoints and diverting traffic to make room for demonstrators.

At the Philadelphia airport, police closed lanes of traffic to vehicles to make room for demonstrators singing the classic Woody Guthrie protest song, "This Land Is Your Land."

At Chicago O'Hare Airport, immigration lawyers set up with their laptops, forming a makeshift legal clinic to help travelers arriving from the banned countries.

While the protest at Portland International Airport remained largely peaceful, at times Trump supporters and protesters clashed, forcing airport police to move in. A Port of Portland and airport spokesperson told CNN affiliate KOIN 6 News that one person was assaulted during the protest and "removed for medical care."

By Sunday night, everyone who had been detained in the initial halt of Friday's executive order had either been released into the United States or put on a plane out of the country, Department of Homeland Security spokeswoman Gillian Christensen said.

She added that 392 green card holders, or lawful permanent residents, were given exemptions and entered the country.

CNN's Emanuella Grinberg and Madison Park contributed to this story.