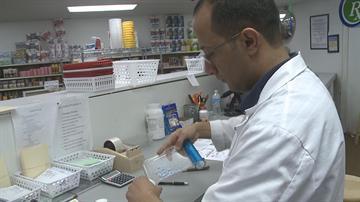 NILES, Mich. -- A fake Niles doctor was known for writing incorrect prescriptions. That’s according to a pharmacist that filled prescriptions for ‘Doctor’ Charles Mosimbwa.

Mosimbwa was arrested Friday after an investigation by the Michigan Attorney General for running a fraudulent medical practice out of the Paradise Medical Clinic on Main Street in Niles.

Nasr Eloksh, a pharmacist at Niles Family Pharmacy located in the same building as Mosimbwa’s clinic, said he would call Paradise Medical Clinic often because Mosimbwa’s prescriptions were incorrect. “We used to call him,” said Eloksh. “’Hey doctor this dose is high’. The patient cannot take that dose.”

“The patient was required to take a maximum (of) four or five tabs,” Eloksh said. “(Mosimbwa wrote them) for six or seven.”

When ABC 57 News asked Eloksh if the prescriptions Mosimbwa wrote could be dangerous for the patient, Eloksh responded: “Yeah, but we were trying to keep track of these things.”

According to Eloksh, at one point Niles Family Pharmacy checked on Mosimbwa’s legitimacy. “When we checked him… he had a license so he was allowed to prescribe.”

Monday Eloksh called several of Mosimbwa’s former patients to let them know their prescriptions are no longer valid in the system. “You have to see another doctor,” said Eloksh. “This medication should be written by another doctor to keep taking your medication.”

According to staff at Niles Family Pharmacy, Mosimbwa often wrote prescriptions for addictive medication that is kept locked in the pharmacy.

Several patients of Mosimbwa’s told ABC 57 News that they were instructed by Mosimbwa not to go to Wal-Mart’s pharmacy because his prescriptions would not be filled there. Wal-Mart did not respond to requests for an interview.