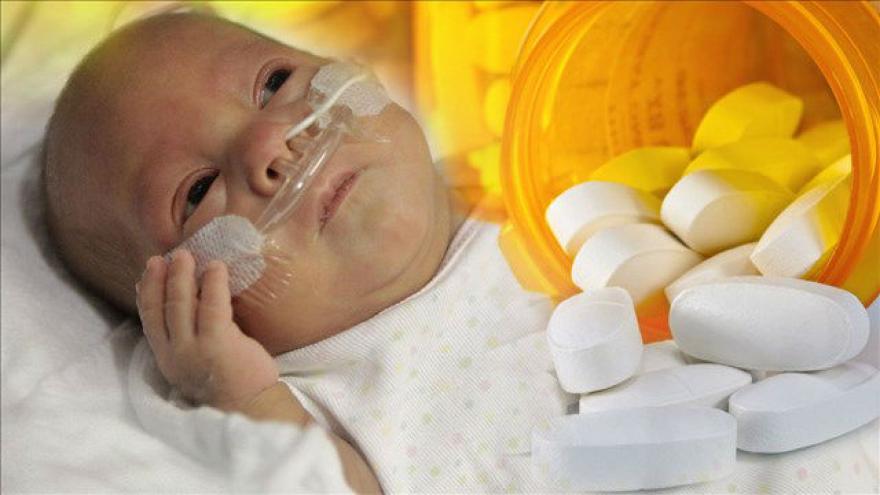 Two compounding pharmacy executives are facing federal charges for allegedly failing to recall \"super-potent\" painkillers. According to the FDA, the babies sickened by those painkillers suffered \"serious adverse effects.\"

Paul J. Elmer, 64, owner of Pharmakon Pharmaceuticals, and Caprice R. Bearden, 62, the company's director of compliance, were indicted Thursday on 10 charges involving drugs that were labeled as far more or far less potent than their actual strength, the Justice Department said.

Hospitals in Illinois, Indiana, Maryland and Virginia received mislabeled doses of pain relievers including fentanyl, morphine sulfate and midalozam, the powerful sedative often used for anesthesia and in some states in lethal injection. Elmer and Bearden failed to tell the clients or the Federal Drug Administration about the mistakes, the indictment states.

Charges against the pair include conspiracy to defraud the government and engaging in commerce with adulterated drugs.

Elmer has pleaded not guilty, and Bearden has been issued a summons, the Justice Department said. A trial is set for August 21. If convicted, both could face prison time and fines of at least $250,000.

At the Noblesville, Indiana-based compounding pharmacy, pharmacists customized medications, which hospitals often use during surgeries, to fit individual needs, then had their potency tested before shipping them to clients, the federal complaint states.

From 2013 to 2016, the company allegedly sent the medications to its clients before getting the test results, the complaint states. Over that period, Bearden and Elmer received notice of approximately 70 drugs that were either weaker or stronger than what their labels indicated.

But Elmer determined that the company should not contact any of its clients "because the health care providers had likely already used the drugs, and because notification would lead to the loss of customers, and therefore, a loss of profit," the complaint states.

Bearden and Elmer are also accused of lying several times to Food and Drug Administration officials during separate inspections.

Three infants suffered "serious adverse events" in February 2016 after they were given morphine sulfate that was nearly 25 times stronger than its label indicated, the FDA said in a February 2016 recall statement. One infant was taken by emergency helicopter from the hospital where the medicine was administered to a nearby children's hospital.

"Injecting a patient with super-potent morphine could result in serious consequences including respiratory depression, coma, and death," the agency said.

Another Indiana hospital reported its staff gave a mislabeled compound of midazolam in 2014 to 13 infants who in the neonatal intensive care unit, the complaint states. The hospital alerted Pharmakon after an employee noticed syringes with conflicting labels, including one that indicated the medicine was twice as strong than what the hospital had ordered.

Pharmakon was aware of the flawed drugs for about two months but didn't do anything to correct the problem, the complaint states.

This case comes a year after the pharmacist who owned a Massachusetts-based compounding center was convicted of racketeering and fraud in connection with 2012 meningitis outbreak that killed more than 60 people and sickened 700 others.