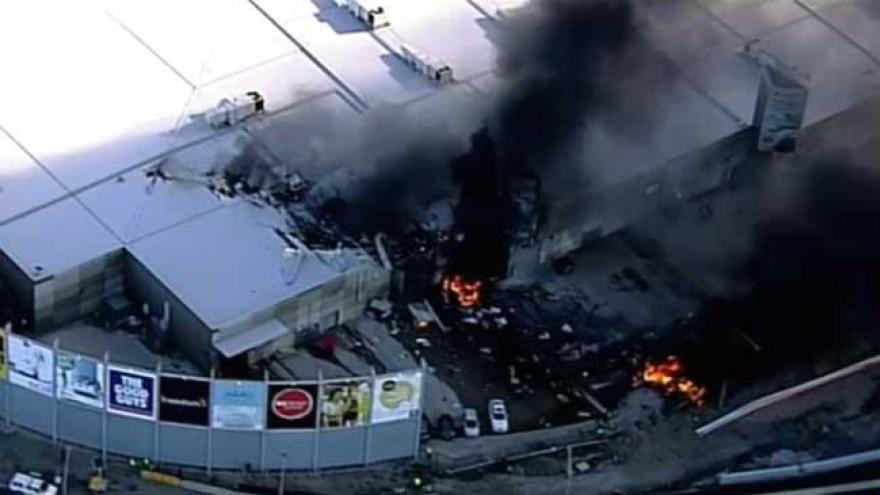 All five people on board were killed in the crash, police said. The four passengers were from the United States, and the pilot was Australian.

Texan Greg Reynolds De Haven, 70, was among the passengers killed. He was on a golf outing with friends during his three-week trip to Australia, his sister Denelle Wicht told CNN.

De Haven, a retired FBI agent and marathon runner, was "an awesome guy" and a "man's man," his sister said.

He was in Australia with his wife, who wasn't on board the plane, Wicht said.

Authorities have not publicly identified the pilot or the other passengers.

'Very lucky' no one was in mall

No one was inside the still-closed DFO Essendon shopping center when the plane went down around 9 a.m., officials said, but some nearby witnesses were being treated for shock.

"It was a catastrophic plane crash that has taken a number of lives," Victoria police Assistant Commissioner Stephen Leane said. "But certainly if we look at the circumstances, we've been very lucky today depending on the time of day and who was around."

The mall will remain closed for another day, police said.

Cause of crash uncertain

Lisa Neville, Victoria's minister for police, told reporters that the cause of the crash is "still being confirmed by police and fire services," CNN affiliate Seven Network reported.

Neville said she believed the plane was a Hawker Beechcraft.

All flights in and out of Essendon, a smaller airport that is separate from Melbourne Airport, were temporarily suspended. Some parts of the usually packed Tullamarine Freeway were closed for part of Tuesday due to scattered debris from the crash.

Aerial pictures from Seven Network showed damage to the roof and infrastructure of the shopping center.

Australian Prime Minister Malcolm Turnbull tweeted he was "deeply saddened" by the crash.

"Our hearts and prayers are with the victims and their families," he said