Pilot: "We've lost all power, and we have no hydraulics" 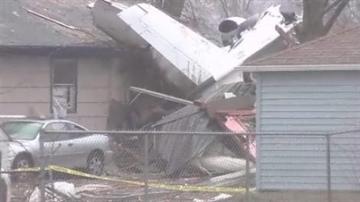 The National Transportation Safety Board has released a preliminary report on the March 17 jet crash that claimed two lives and injured three others in South Bend.

The report is below:

This is preliminary information, subject to change, and may contain errors. Any errors in this report will be corrected when the final report has been completed. NTSB investigators either traveled in support of this investigation or conducted a significant amount of investigative work without any travel, and used data obtained from various sources to prepare this aircraft accident report.

According to preliminary air traffic control information, at 1610:31, the accident pilot established radio communications with South Bend Approach Control while at 11,000 feet mean sea level (msl). The air traffic controller cleared the flight direct to KNUTE intersection and told the pilot to expect a visual approach to runway 9R. At 1611:44, the flight was cleared to descend to 10,000 feet msl. At 1613:06, the flight was cleared to 3,000 feet msl. At 1615:00, the approach controller told the pilot to make a 5-degree left turn to align with runway 9R and asked the pilot to report when he had the airport in sight. At 1615:07, the pilot declared an emergency because of a lack of engine power, reporting that they were "dead stick" and without any power. About 23 seconds later, at 1615:30, the pilot transmitted "we've lost all power, and we have no hydraulics." When the controller asked if the airplane remained controllable, the pilot replied "ah, barely controllable." The controller advised that all runways at KSBN were available for landing and issued the current winds, which were 130-degrees at 10 knots. At 1615:22, the pilot transmitted that the airplane’s navigational systems were inoperative and requested a radar vector toward the airport. The controller replied that the airport was 9 miles directly ahead of the airplane’s current position. At 1616:12, the controller told the pilot to turn 10-degrees left to intersect runway 9R. At 1616:15, the pilot replied "26DK, turning left." No additional voice communications were received from the accident airplane. The approach controller continued to transmit radar vectors toward runway 9R without any response from the accident pilot. At 1618:58, the approach controller told the accident airplane to go-around because the main landing gear was not extended. (The tower controller had informed the approach controller that only the nose landing gear was extended) The accident airplane was then observed to climb and enter a right traffic pattern for runway 9R. The airplane made another landing approach to runway 9R with only the nose landing gear extended. Several witnesses observed the airplane bounce several times on the runway before it ultimately entered a climbing right turn. The airplane was then observed to enter a nose low descent into a nearby residential community.