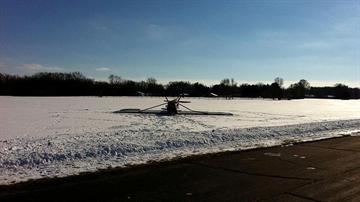 "I was in my office and I got a phone call that we had an incident out on the runway and we came out to investigate to see what happened,” said Tom May, Mishawaka Pilot’s Club Airport Manager.

That's about the same time Dan Clements spotted something out of the ordinary near his office.

Clements works right next to the airport.

"Actually when I first saw it, it was quite alarming. There were several fire trucks, a couple of police cars,” said Clements of DAC Insurance.

He also saw a single engine airplane upside down a few feet from the runway.

"They got a little too close to the edge of the runway,” said May.

"I went into a snow drift, the plowing of the runway was pretty thick and it just flipped me over,” said pilot Steven Lesher.

Steven Lesher and his flight instructor buddy who was acting as his co-pilot were trying to land the plane when it crashed.

They walked away without a scratch.

"We're fine. Crawled out and walked away from it-- no problem,” said Lesher.

As for Lesher's plane, a Luscome 8F that is more than 60 years old-  it's a different story.

"I think it's going to be pretty major, probably going to need an engine tear down and props have got to be overhauled,” said Lesher.

Plenty of onlookers stopped by to check out the damage, many who turned out to be friends of the survivors.

"I was hoping it wouldn't flip over but it did and my pride has been hurt very much from the incident,” said Lesher as he was laughing.

Especially when Lesher found out they were taking pictures.

"I'll probably be haunted for years by this,” said Lesher in a light-hearted manor.

Lesher had to hire a crane company to set the plane upright.