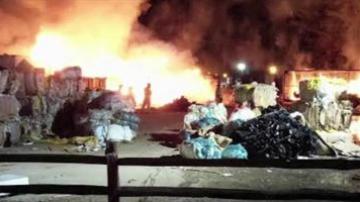 Firefighters responded to the fire around 11:30 p.m.

Fire crews put out the fire before it spread to the main facility, but unfortunately they couldn’t save the trailers that stored some of the recyclables.

"It was nonstop until, well we went to bed about 1 a.m., and they were still coming," said nearby resident Jim Babcock.

Babcock lives down the street from where the fire happened. He said the property has been an eyesore for a while, and it was just a matter of time before something like this happened.

"Like I say because if it does go, and if the whole thing burns down, it's going to burn for days," said Babcock.

Firefighters were on the scene until 1 a.m. putting out hot spots.

There were no reported injuries.