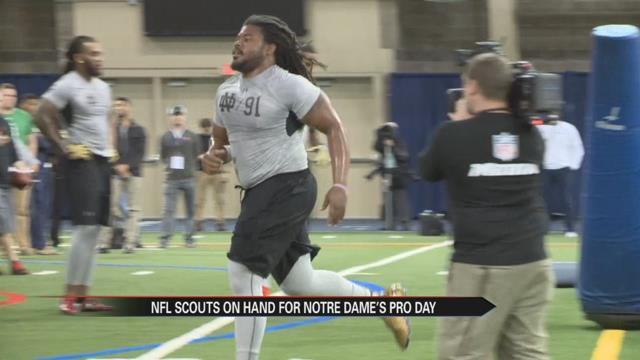 For many players, it's one of the biggest moments of their life: fighting for a chance to play in the NFL at Notre Dame's Pro day.

Tackle Ronnie Stanley was among the top talents.

He's been projected to be taken as high as fifth overall in this year's draft.

Wide receiver Will Fuller didn't do anything to hurt his stock, looking impressive with his route running and pass catching.

Perhaps one of the most interesting prospects is CJ Prosise. Coming off his first year playing runningback, he's already pegged as a potential third round talent. His ability to catch passes gives him more versatility as an athlete.

It was also a chance for players who aren't as highly touted to make their case to get picked.

"I feel very excited," said Wide Receiver Chris Brown. "I definitely feel like I helped myself here. And I really enjoyed this experience."

It's also a time for homecomings. Former Irish QB Everett Golson, who played for Florida State last year, returned to the Notre dame campus. He reunited with friends while trying to prove he can be an NFL QB.

"I always kept up with those guys," said Golson.  "Kind of watching from a far. I watch some of their games and kid of calling out plays. So it's been good."