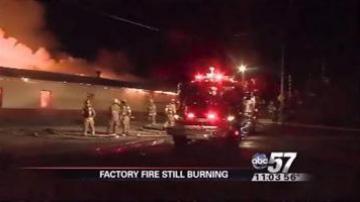 PLYMOUTH, Ind. --  The industrial fire at Home Street Depot started Saturday in Plymouth for over 24 hours.  Firefighters from every agency in Marshall County were brought in.

This sign is almost all that is left after flames ripped through the Home Street Depot yesterday.

"It is definitely going to go in the history books as one of the largest fires that Plymouth has seen", said Fire Chief Rod Miller.

And the enormous fire still is not out yet.

"With the size of this building and the water supply that we had..it's just going to take a while..it could actually smolder for days", said Miller.

Plymouth Fire Chief Rod Miller says between the ruined building and the seven fire departments that were called to put out the fire, He thinks the damage will be close to a million dollars.

And the damage does not stop there.  Firefighters had to spray the house surrounding the fire so they wouldn't catch fire.  Neighbor Nathan Silva even had to evacuate his home.

"The firefighter came up and asked me to leave so me and my sister left", said Silva.

And he says it is a good thing he did, because judging by the smoke damage inside his home, the fire was pretty hot.

"Back on the walls and the siding", said Silva.

Nathan is just happy he and his house are still standing.

"I am just happy my house is okay and i'm okay..hahah", said Silva.