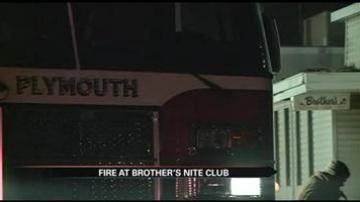 PLYMOUTH, Ind. -- A Plymouth business is closed after a late night fire left the building in bad shape.

Neighbors reported seeing smoke rising from Brother's Nite Club on the 400 block of LaPorte Street around 10:30 on Sunday.

Fire crews believe the building is a total loss.

Authorities were having trouble contacting the club's owner to tell him about the incident. They left him a message on his voicemail.

The fire began in the business' basement, an area that firefighters believe Brother's hadn't used in quite some time considering how hard it was to reach.

Chief Miller told ABC 57 that the fire quickly spread from the basement up to the main floor, and eventually reached the ceiling.

He also said that before they were able to control the flames, they worried it would reach the occupied apartment located directly above the business.

So far, no injuries have been reported.

Investigators have yet to begin their inspection to determine the cause of the fire.