Poles outraged over controversial bill take to the streets 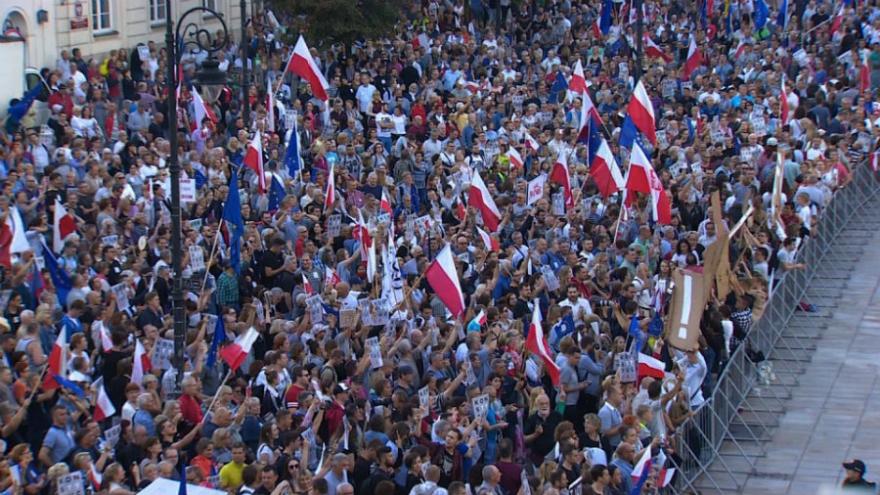 WARSAW, Poland (CNN) -- Thousands of chanting and flag-waving protesters took to the streets in this Polish capital Sunday evening to demonstrate against a controversial bill putting the Supreme Court under government control.

In a rally at the Presidential Palace, demonstrators wielded Polish and European Union flags, held posters saying "constitution" and "I love and understand freedom," and shouted "we want a veto," "free court" and free Poland."

After the throng dispersed, many continued their protests at other locations, in front of the High Court and at the Sejm, Poland's lower house of parliament.

Critics have slammed the legislation's passage as a blatant power grab by President Andrzej Duda and his right-wing Law and Justice Party (PiS), but the party insists it is simply carrying out needed judicial reform.

The President has 21 days to sign or veto the legislation. He is widely expected to approve it, but protesters are calling on him to reject it.

Parliament's upper house, the Senate, approved the bill just before 2 a.m. on Saturday after 16 hours of debate, sparking mass protests in more than 100 cities across the country and a wave of condemnation from abroad. The lower house voted for the measure on Thursday.

The move to control one of the last remaining independent government institutions has prompted concern in Washington and triggered warnings from the European Union that it is putting judicial independence at risk.

The bill's passage could mark a turning point for the Eastern European country, one of the first former communist nations to join the European Union.

A poll conducted by CNN affiliate TVN found that 55% of Poles said Duda should veto the court laws; 29% said he should not.

He and other critics of the bill admit the judiciary needs reform but disagree about the way in which the PiS has gone about it.

"It is a situation (where) you should repair your house, mend windows, paint walls, seal the leaking roof," said Bodnar. "But you should not put explosives under foundations of the house."

Since coming to power, the Law and Justice party has eroded other institutions and freedoms: The right to peaceful assembly has become more restricted, and new media laws have made it more difficult for the press to operate independently.

A top EU official earlier this week threatened the use of Article 7, a mechanism that would allow for sanctions against Poland and possible suspension of its voting rights in the bloc. The measure has never been used before.

European Council President Donald Tusk, a former Polish Prime Minister from the opposition Civic Platform Party, warned Thursday of "dangerous consequences" for Poland's standing on the world stage and said he had asked Duda for an urgent meeting.

"Bringing the courts under the control of the governing party in the manner proposed by the Law and Justice Party ... will ruin the already tarnished public opinion about Polish democracy," he said.

The public outcry over efforts to curtail judiciary independence has flown largely under the radar amid recent high-profile visits to Poland by US President Donald Trump and the British royals.

But the US State Department tweeted a warning Friday to Poland "to ensure that any judicial reform does not violate (the) constitution & respects judicial independence."

When asked whether the Trump administration would urge Duda to veto the measure, State Department spokeswoman Heather Nauert said: "I am not aware if we will ask him to do that."