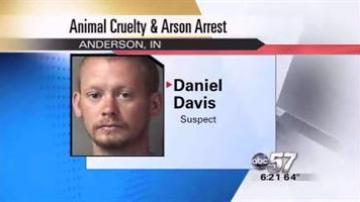 ANDERSON, Ind. -- A shocking case of animal cruelty in Indiana!

Police arrested 32-year-old Daniel Davis after they found him hitting the heads of decapitated cats with a baseball bat!

Officers were responding to a house fire in Anderson when they came across Davis.

Police said he had been living at his aunt's house and set it on fire!