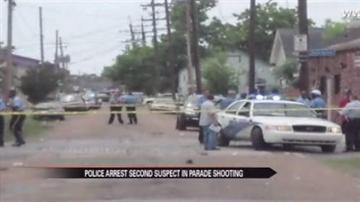 Police say they have a second shooting suspect in custody.

Police identified the teen as a suspect Monday, when footage of the shooting was released.

"And we have several other people who have been arrested for being accessories and harboring these individuals," said Mayor Mitch Landrieu, New Orleans.

The teen is the older brother of another teen in custody.

19 people were wounded in Sunday's attack, including two 10-year-old children.