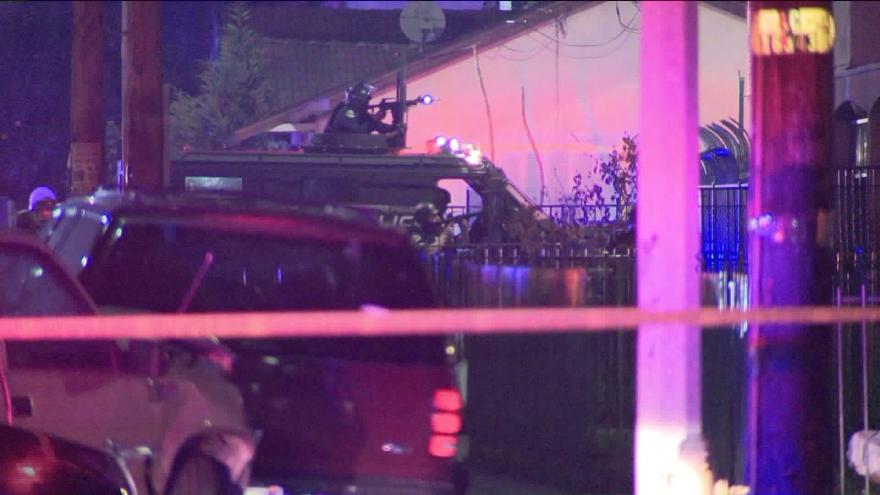 (CNN) -- Police on Saturday afternoon arrested a man suspected of killing one police officer and wounding another in Pomona, California, authorities said.

Police Chief Michael Olivieri identified the officer who was killed as Greggory Casillas, 30, a rookie still in field training.

"Gregg is a hero, a man to be looked up to," Olivieri said. "He left his family at home to protect yours and his ultimate sacrifice will never be forgotten."

Authorities made the arrest after the suspect barricaded himself in an apartment for more than 15 hours.

The incident began Friday night after the suspect evaded police in a pickup, crashed and fled.

"The suspect ran into an apartment complex and the officers gave chase," Capt. Christopher Bergner of the Los Angeles County Sheriff's Department said at a news conference. "As he barricaded himself in a bedroom, officers attempted to contact him. He then began firing through the door, striking the two officers."

Authorities have not identified the suspect.

Olivieri said Casillas leaves behind a wife and two children. He joined the department in 2014 and worked at several jobs before becoming an officer. He was pronounced dead at the hospital.

Both officers were transported to a hospital.

"The other officer is in serious condition and is undergoing surgery. We expect him to be fine," Bergner said.

Los Angeles County Sheriff Jim McDonnell said the wounded officer, who has not been identified, was trying to help Casillas when he was shot in the face.

Other officers at the scene pulled them out of the line of fire, the sheriff said.

There have been no other injuries or deaths since the two police officers were struck by the suspect's gunfire just after 9 Friday night, Deputy Trina Schrader of the sheriff's department told CNN.

So far this year, 17 law enforcement officers across the United States have died after they were shot, including an officer killed Tuesday in Missouri. Officer Christopher Ryan Morton, 30, was killed after being dispatched to the wrong house, a Missouri Highway Patrol official said.