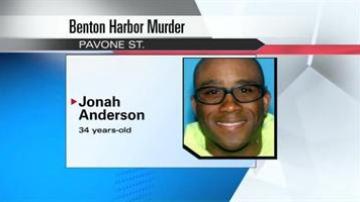 BENTON HARBOR, Mich. -- A press conference was held in Benton Harbor Friday about the death of 34-year-old Jonah Anderson. His family, friends and officials all pleaded for someone to come forward with information.

"It's like it's not real. But then when you close your eyes you have a real picture so you try to block it and you can't," said Delores Anderson.

Her husband, 34-year-old Jonah Anderson was killed in front of their home Wednesday night.

"It became very real when we got his suit and stuff for the funeral. It's like okay, he's not coming home. Can't talk to him. I just deleted all my messages, so I don't even have a message to listen to," said Delores.

The victim's family, friends, and the Benton Harbor Public Safety Department held a press conference Friday, asking someone to come forward with information on who killed Jonah.

"There will be no stone left unturned, no dark corner that we won't look behind until we find out who did this," said Daniel McGinnis, Deputy Director of Benton Harbor Public Safety Department Police Services.

"My husband was an honorable man that didn't bother anybody. If you called him he was there if you needed it he gave it," said Delores.

"It's tragic. Cannot explain how I feel, how the local union feels. He's a friend, he's a coworker, he'll be missed," said Bob Kara, Business Manager for Iron Workers of South Bend.

Jonah was a member of the Iron Worker's Union in South Bend. They are matching the $1,000 reward that police are offering in this case.