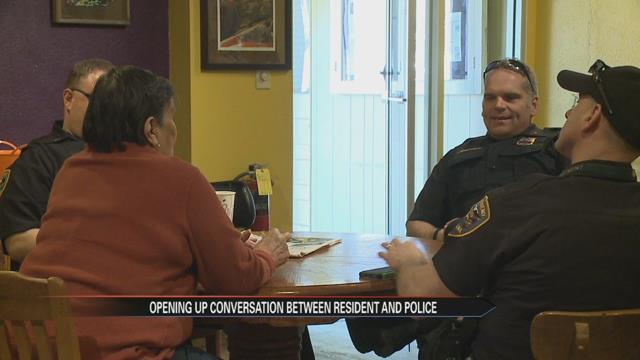 South Bend residents were given the opportunity to get to know the city’s officers at Cops, Coffee, and Conversation at the Well in River Park on Saturday afternoon.

There’s more to Officer Mollie O’Blenis than her badge. She grew up in South Bend. Her mom is a teacher and her grandfather is a coach.

“For me this is home. I want to make sure that I can do the best good in my home town that’s possible. So that’s why I became an officer,” said O’Blenis.

But being an officer comes with different challenges than a teacher or a coach in South Bend.

Something South Bend is working to prevent.

“The best way to end the kind of violence we’ve been seeing is just to talk and communicate back and forth between the police and the people,” said Taylor.

“It’s a great opportunity for everybody to really learn and grow both as a community and for me as an officer,” said O’Blenis.

Chief Scott Ruszkowski says the responsibilities of the job can sometimes make it tough to build those vital relationships.

“We need to let that guard down. We are people. We are the public. The public are the police and I think if people understand that and if officers understand that, it’s a win-win for everybody,” said Chief Ruszkowski.

With a goal of building that understanding Saturday’s conversations weren’t really between “residents” and “cops,” but friends.

“We had some hilarious conversations about a variety of topics,” said Taylor.

“We talked about the planets, the solar system, we talked about kids. We’re exactly the same it’s just the clothing that’s different,” said Chief Ruszkowski.