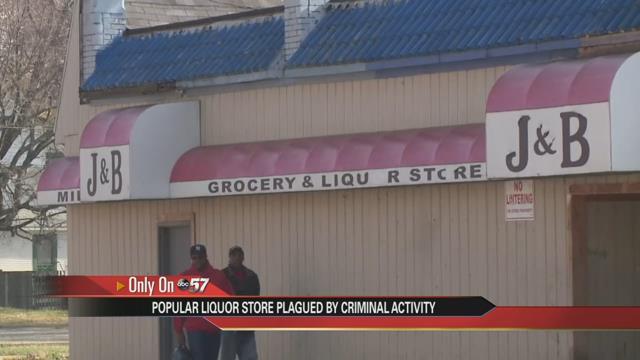 After filing a public information request we took the numbers to officials, the store manager, and neighbors.

Dayrl Jackson said, "This store right here used to be in an area where people can come, no harm no problems no anything no drug activity no gunshots no anything! But now it’s the number one thug area.”

A "thug area" is how people describe the neighborhood surrounding J and B’s liquor; it's the only business on the block that’s not abandoned.

Jackson said, “I was attacked right here in this alley by a thug. He hit me right in the head with a pipe.”

Jackson said, “That store right there all they care about is making money. They don’t really care about the complaints.”

Joga Singh, the store manger of J & B's liquor store said they are the victims not the perpetrators.

Singh said. “They’re selling the marijuana and drugs. No good things. Then sometime they come inside and sell to the people.”

Singh came to the U.S. from India chasing the American dream. But in the past year he's been visited by police who are sent to investigate shootings, armed robberies, and other disturbances.

Singh said, “The crime people they do outside. The shooting, that is their personal matter.”

Singh said he isn’t shutting down because business is doing well. J and B's is one of the highest grossing liquor stores in Southwestern Michigan.

He said he's installed a high tech security system and has no loitering signs outside but it doesn't deter crime.

One neighbor doesn't blame the store.

Jackson said, “The community won’t do nothing about it. They won’t speak up. They’re afraid that if they say something they going to come bomb their house.”

The Director of Public Safety at the Benton Harbor Police Department did not get back to ABC57 for this story.

The Sheriff’s department said they are increasing patrols in the area trying to combat the problem.

According to Mayor Pro-Tem and safety board chair Sharon Henderson, the numbers don’t surprise her.

When the economy crashed, she said that particular area went down hill.

Henderson said, “I remember being able to walk down that street and feel safe.”

Henderson said for the past year she’s been working on a project to rally investors to renovate the desolate are on Empire Avenue.

She thinks if people had jobs and pride in their community, there would be less crime.

Henderson said, “If you don’t feel proud about where you live at, and it looks like a desolate jungle, then why would you want to keep it up? Where would crime be now? So I think a lot of that plays a part in it.”

For comparative purposes we also put in a public information request for the police dispatch log to another high grossing liquor store.

A & D's beer and liquor store on Pipestone Ave. received 36 calls in about one year compared to 154 at B & J's liquor store.

After calling several city commissioners, a few of them said they plan on bringing up ABC57's story at Tuesday night's public safety meeting.