Police cracking down on problem apartment complex in South Bend 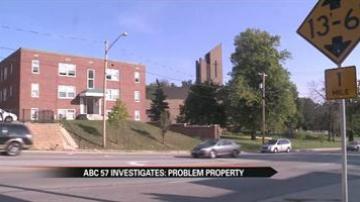 SOUTH BEND, Ind. --Neighbors on Colfax Avenue are fed up with the Saint James Court Apartment complex at the end of their street. They say the complex is turning their quiet street into a dangerous one.

Just last week there was a stabbing at the complex.

Officers are going after the landlords.

Neighbors along Colfax Avenue say their street is serene, that is - until you get to the apartment complex at the corner of Eddy Street where it turns deadly.

“In the past three years there have been several murders,” said a neighbor who did not want to be identified.

We asked the South Bend Police Department to track down the statistics for the complex.

Last year there were 99 calls to one apartment building alone.

Half of which were violent crimes, like the shooting in May that injured a young mother.

The good news is in two weeks the Common Council will be instituting a nuisance ordinance to hold landlords accountable.

“That is going to allow us the man power and the ability to start doing some real time tracking of exactly the nature of calls and the number of calls,” said Captain Phil Trent.

With this new nuisance ordinance, if an apartment complex has over 5 calls in a sixty day period, the landlord will be fined $250.

Which is making them crack down on their nuisance tenants, so apartments across South Bend can be safer for people that live there and their neighbors.

I called the owner of Saint James Court Complex to find out how he is combating the violence.

He did not answer.

In this ordinance medical calls will not count against the property owner.