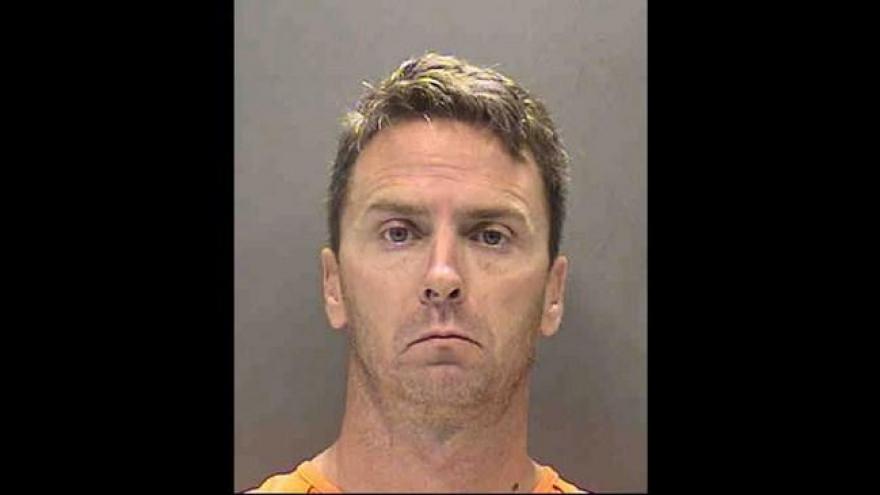 (CNN) -- A 79-year-old woman's interaction with a longtime Sarasota, Florida, deputy sheriff began with a simple call for help.

It ended with that officer allegedly forging checks and attempting to kill the woman and frame it as a suicide, according to a legal affidavit and a law enforcement official.

Detective and patrol deputy Frankie Bybee was arrested on Monday and charged with grand theft, exploitation of the elderly and attempted murder, officials said.

Sarasota County Sheriff Tom Knight laid out the dramatic allegations against the 18-year sheriff's veteran at a news conference on Monday, saying his actions were a "disgrace" to law enforcement professionals everywhere.

"To use that uniform to be sent to her home to provide her help and then exploit it is unacceptable," Knight said.

Bybee, 46, also faces charges of battery on a victim 65 years or older, burglary and forgery, according to officials.

At an initial court hearing, Bybee's bond totaled more than $1 million. His attorney has not responded to a request for comment. Bybee is set to be arraigned February 24.

According to an affidavit and police timeline of the case, Bybee befriended the 79-year-old woman shortly after responding to a call for service on October 21, 2016. He began making regular visits to her home and introduced her to members of his family in an effort to gain her trust, Knight said.

By December 20, the woman called police to report that Bybee was harassing her and trying to control her. The sheriff's office then launched an internal affairs investigation.

Investigators learned that the woman had asked Bybee to take care of her dog while she was ill and in the hospital. He received a check for $1,000 in case the dog had medical needs. However, the affidavit accuses Bybee of depositing that check in his personal bank account. In addition, he allegedly gave the dog away on Craigslist without the woman's consent.

On January 9, with the internal investigation well under way, detectives seized an envelope mailed to Bybee at the Sarasota Sheriff's Office, according to officials. Inside were four checks appearing to be from the woman made out to Bybee and his three children that totaled $65,000.

However, the woman said she did not address or sign the checks, and forensic analysis showed Bybee's fingerprints on one of the checks, officials said. Bybee was immediately placed on administrative leave.

That's when the woman reported to the sheriff's office that Bybee had entered her unlocked front door while wearing dark clothes and latex gloves, according to officials.

Once inside, Bybee allegedly held the woman down and forced prescription medication into her mouth, causing lacerations and abrasions to her face as well as bruising to her body. She lost consciousness and called for help when she awoke.

Investigators discovered that the door to her garage was left open and her car was left running, filling her home with carbon monoxide.

At a press conference on Monday, Sheriff Knight flatly called Bybee a "criminal" and criticized his decision not to tell the truth to investigators.

"It would be nice to have somebody who wore this uniform for 18 years to be forthright and give us the truth," Knight said. "But he's a criminal, and he's acting like a criminal. So thus he gets arrested and treated like a criminal."

Knight said that Bybee had previously been suspended twice for violations of internal policies.

CNN's AnneClaire Stapleton and Ryan Rios contributed to this report.