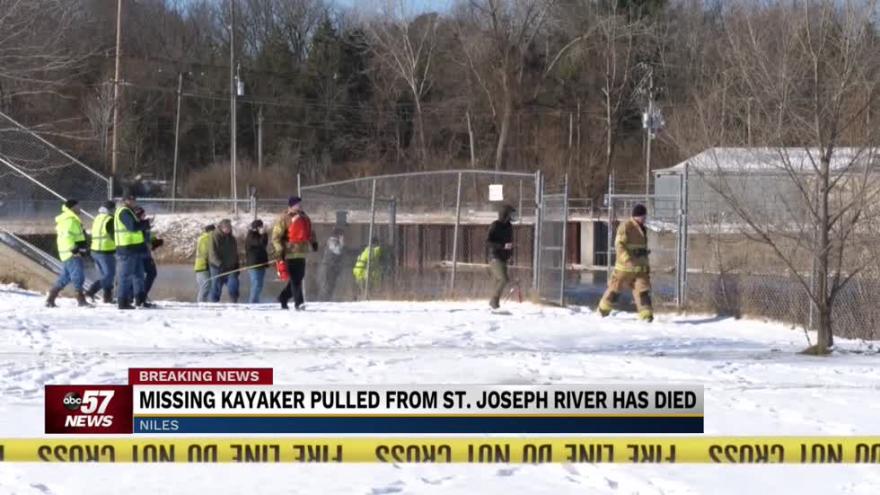 Niles Police have released new details in the death of a kayaker on the St. Joseph River on Wednesday. Police also released the identities of all four kayakers.

Niles Police, Niles Fire, the Berrien County Sheriff's Office's dive team and several other agencies responded to the St. Joseph River near the dam at French Paper at approximately 8:30 a.m. Wednesday after receiving a 9-1-1 call about kayakers whose boats had overturned.

When first responders arrived, one kayaker was found in the water clinging to a cable/buoy about 40 yards upstream of the dam. He was rescued by emergency personnel using a boat.

Another kayaker who was in the water swam ashore and exited the river on his own, reports said.

A third kayaker stayed in his kayak and tried to help those in the water.

A fourth kayaker, 40-year-old Jean Claude Mutabazi of South Bend, was swept downstream and grabbed onto a branch entangled on the top of the dam. He was unable to hold on and was swept away.

Crews then focused on a tree that was lodged at the top of the dam. When the tree was moved, Mutabazi was located and recovered by boat.

Mutabazi was taken to an ambulance at a nearby boat launch.

Mutabazi was pronounced deceased at 12:38 p.m. An autopsy is pending.

All four boaters were wearing personal flotation devices, including Mutabazi.

The water temperature was recorded at 39 degrees with air temperature at 25 degrees Fahrenheit during the incident.

The other three kayakers were identified as 81-year-old Ted Knudson of South Bend, Tom Lehman, 72, of South Bend and Pierre Celestin, 37, of Berkeley California.

The two kayakers who fell into the river were taken to the hospital for cold exposure and have since been released.

The following agencies participated in the search and rescue effort: