Police investigating armed robbery at a 7-11 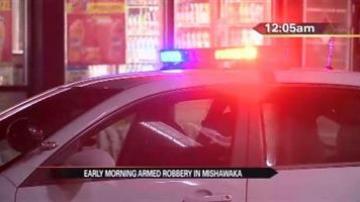 MISHAWAKA, Ind. — Police are investigating a robbery at a local convenience store.

Police responded to the 7-11 on Douglas Road just after midnight.

Officers tell ABC57 News that it's the third 7-11 in our area robbed in the last 48 hours.

Police say that two men walked into the 7-11, pulled out guns and demanded cash.

The men were wearing masks to cover their faces.

One of them went behind the counter and took money from the register.

Meanwhile, an eyewitness pulled up to the gas station right in the middle of the robbery, interrupting it.

The men ran out of the building and split up, getting away with just a small amount of money according to the store owners.

By the time police got there, they were long gone.

After 45 minutes of searching with a K-9 unit, police determined that the thieves had a car waiting for them nearby.

On Thursday morning, just after 1 a.m. the 7-11 at the corner of East LaSalle and Niles Avenue was also robbed by two men with guns.

Police think the two robberies may be connected and plan to look at surveillance video to verify that.