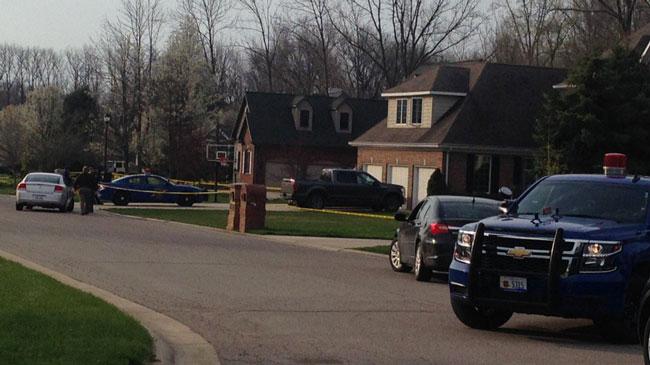 A well-known Michiana journalist was found dead, along with her husband, in her home on Wyndwicke Drive in Royalton Township Tuesday morning. Michigan State Police say it appears she was killed by her husband in a murder-suicide.

Berrien County dispatch received a 9-1-1 call from a child about a man down at approximately 6:30 a.m.

“We believe that the children are the ones who called it in," said Sergeant Ryan Schoonveld of the Michigan State Police.

The couple’s three children, who are 8, 9 and 10, were waiting at the door for officers.

When police went inside, they located 45-year-old Denise Bohn Stewart deceased in an upstairs bedroom. She had been shot multiple times.

In the basement they located the body of her husband, 51-year-old Eric Stewart.

“At this point we believe the male suspect was the shooter," said Christensen. “Preliminarily, it appears there were some domestic problems that had been ongoing and we believe that that’s probably what predicated what happened here today."

The children were not harmed. They are with family and friends.

Bohn Stewart was a former WSBT anchor and reporter. At the time of her death she was a WSJM video news anchor and co-host of 98.3 The Coast morning show.

Family, friends and neighbors gathered at the scene throughout the day to mourn together as investigators began combing through the evidence.

“They were the typical neighbors. They were fun to hang around with and just very nice," said Greg Guernsey, a friend and neighbor of the Stewarts.
Autopsies will be conducted in Grand Rapids on Wednesday.

Many people spoke out on Tuesday about the death of Bohn-Stewart.

98.3 The Coast posted this statement on their Facebook page:

We have lost a member of our family at Mid-West Family Broadcasting.

The Berrien County Sheriff’s Department and Michigan State Police are investigating the death of WSJM video news anchor and 98.3 The Coast morning co-host Denise Bohn Stewart, who was found dead in her home with her husband, Eric Stewart Tuesday morning in the 3100 block of Wyndwicke Drive in Royalton Township. Their three children were home and called 911 just after 6:30 a.m. Denise had also been a news reporter and anchor for WSBT-TV in South Bend prior to returning to Mid-West Family Broadcasting in 2015.

The circumstances surrounding their deaths have not been revealed as yet by investigators.

AEP issued the following statement about their employee, Eric Stewart

Eric Stewart was a 28-year AEP employee. He was a Maintenance Supervisor. Our thoughts and prayers are with all those impacted by this terrible news, as well as with all of our employees. We have made grief counselors available to our employees. We’re still processing this ourselves. That’s all we have to say at this time.

Denise Bohn was my friend for 25 years. We covered local meetings at competing radio stations in the early 1990s. She was a great mother, award-winning broadcaster, cancer survivor and one of my best friends. Sue and I are praying for her family and children with heavy hearts during this tragic time.

I was devastated this morning to learn of the news of the passing of my friend, community leader and journalist Denise Bohn-Stewart.

Denise was full of love for her family, friends and community. She was a cancer survivor, a passionate advocate for breast cancer research and always a professional. My prayers are with her family, and most especially, her three children.

Please note: In our 5 p.m. video we incorrectly stated Eric Stewart was 50-years-old.